The House, after four days of debate, passed a nonbinding resolution Friday disapproving of President Bush's plan to send additional soldiers to Iraq.

Democrats, led by Speaker of the House Nancy Pelosi, said it was time to begin withdrawing troops from Iraq.

"The passage of this legislation will signal a change of direction in Iraq that will end the fighting," Pelosi (D-CA) said on the floor of the House Friday.

The final tally of the votes approving the resolution was 246-182.

The resolution was purposely kept simple and straightforward in an effort to win wide bipartisan support. But only 17 Republicans — some of whom had spoken in favor of the measure earlier in the week — voted for the resolution.

Some 400 members of the House took part in the debate over the resolution, in which democrats and republicans alike criticized the conduct of the war in Iraq, but differed over what course should be pursued from here.

Tomorrow, in an unusual Saturday session, the Senate will attempt to take up the same resolution the House passed. But Senate Republicans have promised a filibuster to prevent that.

Download an MP3 of NPR coverage and analysis of the House debate. 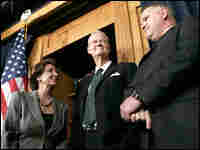 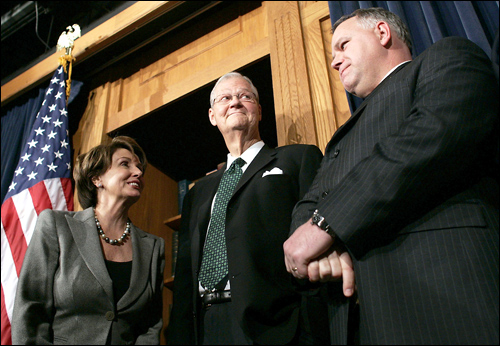 The resolution is nonbinding, but its symbolic value was obvious by some 400 speeches given over nearly 45 hours of debate spread out across four days. The measure puts one chamber of the Congress on record in opposition to the president's most recent plan for a turnaround in a war that has resulted in more than 3,100 lost lives among U.S. soldiers and cost more than $340 billion. Another $245 billion has been requested for the next 20 months.

The vote was 246 in favor of the measure and 182 opposed — as 17 Republicans joined 229 Democrats voting yes. Voting no were 180 Republicans and just 2 Democrats.

The resolution's language says that Congress will continue to support and protect members of the United States Armed Forces in Iraq. It cites their brave and honorable service, but it then says that "Congress disapproves of the decision of President George W. Bush announced on January 10, 2007, to deploy more than 20,000 additional United States combat troops to Iraq."

After the vote, Speaker of the House Nancy Pelosi (D-CA) called it a historic day: "Congress gave the American people an opportunity to hear, in a bipartisan way, why the president's escalation is not the way to go, and heard in a strong, strong voice that we all support our troops."

Meanwhile, at the White House, Press Secretary Tony Snow insisted that the president was not consumed by the debate. Indeed, it was later announced that at the time of the vote, the president was having two moles removed from his face. Doctors said they were sure both growths would prove to be benign.

Earlier in the day, Snow said that President Bush didn't have to watch C-SPAN to know what members of Congress thought about the war. Snow also had this warning about the impact of such a resolution: "Members of Congress have taken their own gamble here. They're gambling on failure — some members, at least."

Snow said the president's plan is for success in Iraq, and he stressed that the increase in troop levels is going forward despite the vote. In a written statement following the vote, the president's spokesman changed the subject a bit, putting the focus on whether Congress will continue to fund the war — something not addressed in the nonbinding resolution passed today.

Snow wrote: "Soon, Congress will have the opportunity to show its support for the troops in Iraq by funding the supplemental appropriations request the president has submitted, and which our men and women in combat are counting on. The president believes that the Congress should provide the full funding and flexibility our Armed Forces need to succeed in their mission to protect our country.

But Democrats were not going to allow the White House to set the tone of the post-vote debate. Rep. Jim Clyburn (D-SC) said afterward that the resolution sends an important message about oversight after six years in which a Republican-controlled Congress routinely approved whatever the administration sought for the war.

"I believe that this vote today helps us as a Congress regain our footing," Clyburn told reporters at the Capitol, "a footing which we lost within the last two Congresses. And because we lost our footing as a Congress, I think that our nation lost its way on the international stage."

At one point in the week, members on both sides were predicting a larger Republican vote in favor of the resolution – some were saying it could be in the thirties or even higher. In the end, however, only about a dozen Republicans spoke in favor on the floor, suggesting that higher expectations for GOP support were overstated.

Late in the week, Democrats' talk about cutting war funding in the soon-to-be-considered supplemental spending bill for Iraq and Afghanistan took center stage in the floor debate, and outside the chamber as well. That may have cost the resolution some Republican votes. It's also possible that the floor debate itself made a difference, especially in the emotionally charged final hour of the debate on Friday.

Rep. Sam Johnson of Texas spoke last for the GOP, and while it's not clear he moved any votes, he surely changed the mood. Johnson movingly described his experiences in serving seven years as a prisoner of war.

Johnson said he was kept in leg stocks "like a Pilgrim," and then forced to wear leg irons during his incarceration, much of which was spent in solitary confinement.

After he exhorted Congress "to let my body serve as a brutal reminder that we must not repeat the mistakes of the past" and support the troops in Iraq "all the way," Johnson snapped off a salute to his colleagues who had gathered to hear his speech.

Republicans, and many of the Democrats in the chamber, gave Johnson a standing ovation lasting several minutes.

The Democrat-led House has adopted a nonbinding resolution objecting to President Bush's plan to increase the U.S. military presence in Iraq.

Below is the text of the resolution.

Disapproving of the decision of the President announced on January 10, 2007, to deploy more than 20,000 additional United States combat troops to Iraq.

Resolved by the House of Representatives (the Senate concurring), That —
(1) Congress and the American people will continue to support and protect the members of the United States Armed Forces who are serving or who have served bravely and honorably in Iraq; and (2) Congress disapproves of the decision of President George W. Bush announced on January 10, 2007, to deploy more than 20,000 additional United States combat troops to Iraq.