Accessibility links
Harvard's Faust: Boundaries Remain for Women Drew Gilpin Faust is poised to become the first woman president of Harvard University in its 371-year history. The 59-year-old Radcliffe dean recalls being a "sort of a smart-aleck" girl growing up in a world dominated by men. 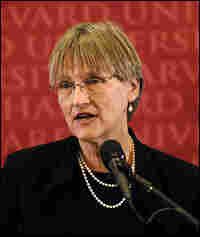 Drew Gilpin Faust, 59, is poised to become the first woman president of Harvard University when she takes office in July. As a child growing up in a tradition-bound family in the Shenandoah Valley of Virginia, she could hardly have imagined reaching such heights.

In fact, Faust, currently the dean of Radcliffe Institute for Advanced Study, says her mother used to tell her: "It's a man's world, sweetie. And the sooner you learn that, the better off you'll be."

Faust would fight with her mother over whether it was appropriate for her to drive a car at night, even if one of her three brothers was a passenger. Her mother believed her daughter had to temper her ambitions.

"It seemed [to my parents] almost squandered to have me be talented in school. It was seen as sort of a problem – 'What do we do with her?'" Faust tells Steve Inskeep. "And I was sort of a smart-aleck, I suppose, at times. Opined on a variety subjects, when it was more appropriate for a young woman of my generation and my surroundings in Virginia to be a little more reticent, let men take the lead."

Faust left Virginia before she was grown to attend what was then an all-girl's boarding school. She later enrolled at Bryn Mawr, a women's college.

Faust says she can understand her mother's impulse to narrow her horizons.

"I think my mother's comment was one of bitterness... and it was also, I think, a little bit, perhaps, of resentment that I should push at boundaries that she had had to accept and live with," Faust says. "And who was I to say that I could be different?"

Women today still face boundaries, but less so than their counterparts did a generation ago, she says.

Still, only nine of the Fortune 500 companies are headed by women. Even though half of the Ivy League schools will now be led by women, about 75 percent of the tenured and tenure-track faculty at Harvard are men.

Faust's predecessor, Lawrence Summers, stepped into controversy when he suggested that women were not as strong in the hard sciences and mathematics as men. To redeem himself, he asked Faust to head an effort to recruit, retain and promote women at Harvard.

She saw it as "a moment of great openness at Harvard, a moment when we had a real chance to make changes," Faust says. "We need to be thinking about breaking down all boundaries that might inhibit the full realization of [Harvard community members'] potential."

Even though Summers was forced out of the presidency, Faust says she will continue some of his initiatives — particularly the enhancement of science, the breaking down of disciplinary boundaries and the improvement of undergraduate education.

Those who chose Faust hope she can make reforms with more consensus than Summers could. As a historian, Faust says, she's all too aware that "change is often frightening."

"That doesn't mean we shouldn't do it," she says. "It just means that we should recognize that it can be difficult and figure out the ways to make our way through it most successfully."