Accessibility links
Abu Dhabi Arms Fair Markets Death, Destruction Arms dealers and buyers from 50 nations are in Abu Dhabi for the International Defense Exhibition. This year's buyers are expected to purchase tens of billions of dollars worth of arms and counter-terrorism equipment. 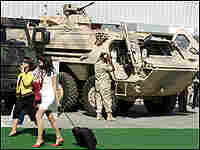 Two women walk past tanks as they attend the opening of the IDEX exhibition in Abu Dhabi. Karim Sahib/AFP/Getty Images hide caption 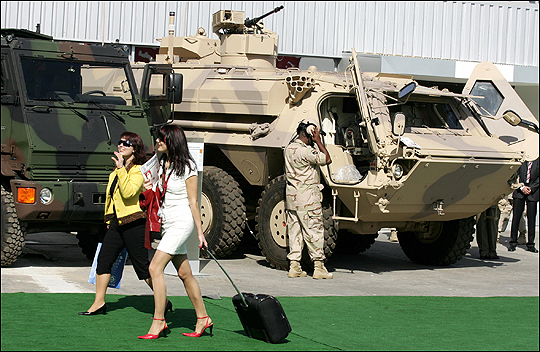 Two women walk past tanks as they attend the opening of the IDEX exhibition in Abu Dhabi.

An arms trade fair in Abu Dhabi, the capital of United Arab Emirates in the Persian Gulf, is expected to be the most successful yet.

Persian Gulf states, led by Saudia Arabia, will be embarking on a buying spree, analysts say, fueled in part by growing fears in the region about Iran's influence.

More than 850 manufacturers — makers of everything from micro-surveillance cameras to massive battleships — are hawking their wares. And they're drawing interest from about 90 official delegations, including Gulf states with treasuries bulging with petroleum wealth.

Analysts say it's not clear that many of the high-tech weapons purchased this week will ever need to be used, but what is certain is that at this point in the 21st century, death and destruction are still very big business.

As you walk through the exhibition hall, you can hear a recorded voice at one booth intoning: "On a 360-degree battlefield, the best defense is a precise and powerful offense."

"The emphasis now is on air force capability, on naval capability," he said. "Now in the region we're facing major problems, from the situation in Iraq, the Iranian nuclear program, the Iranian interventionist policy. Basically, we are already in major destabilization of the region. And it is a major factor which encourages these states to seek some sort of protection."

Inside and outside of the sprawling Abu Dhabi exhibition center, row upon gleaming row of helicopters, tanks and armored vehicles stand next to weapons that promise to shoot them down or blow them up. In the Russian Pavilion, one company advertises 1,200-pound cluster bombs, and another offers improved armor-piercing ammunition. Just around the corner, a third vendor sells upgraded armor for military vehicles.

In the American section, Jim Hall of AAI Advanced Technology says he's got just the thing for countries looking to protect, say, valuable oil facilities: an unmanned surveillance boat for round-the-clock patrols. Unmanned vessels have been around since the Vietnam War, Hall says, but this one goes faster, can stay out longer, and can launch an unmanned aircraft from its deck.

"This never gets tired, never needs a break, never misses anything," Hall said. "It also has, of course, no risk of human life being lost. We haven't taken the step to arm this yet. People are a little nervous about having a robot with a trigger on it. But of course it can be done."

In fact, unmanned vehicles and robots are a prominent theme at this year's exhibition.

Jamil Ahad, president and CEO of Robotic FX, outside of Chicago, Ill., is showing off what he calls "the world's first low-cost, tactical surveillance robot."

"We just met with the head of Kuwait's EOD (explosive ordinance disposal), he's interested in this type of technology," Ahad said.

And if the robot gets damaged in the field, these buyers could easily afford a new one. These robots cost $50,000 to $90,000 each. In a sobering reminder of the staggering amounts of money involved in the arms trade, that puts them in the category of a disposable product.

In addition to anxiety about Iran, countries perceive a need to enhance counterterrorism efforts.

Robin Hughes, deputy editor of Jane's Defense Weekly, one of the sponsors of the exhibition, says that means better surveillance, earlier warning and the ability to prevent attacks.

As with any trade fair, the trick is to match the right buyer with the right seller. At one booth, two Southeast Asian military officers listened to a manufacturer sing the praises of a holographic gunsight, which was mounted on a plastic model weapon. When he paused for breath, one of the officers gently tapped the plastic and asked: "Where can we buy the real guns?"