Accessibility links
Is Milwaukee Milwaukee Without Bowling? The U.S. Bowling Congress is considering moving its headquarters out of Milwaukee, a city where bowling is as popular as beer. The group says the cost of doing business in Milwaukee is too high. If it moves, it would be another blow to a city that has lost much of its blue-collar industrial heritage, from manufacturing to brewing.

The U.S. Bowling Congress is considering moving its headquarters out of Milwaukee, a city where bowling is as popular as beer. The group says the cost of doing business in Milwaukee is too high.

If it moves, it would be another blow to a city that has lost much of its blue-collar industrial heritage, from manufacturing to brewing. Recently, Milwaukee-based Miller Brewing merged with Coors; the headquarters of the new company will likely not be in Milwaukee. 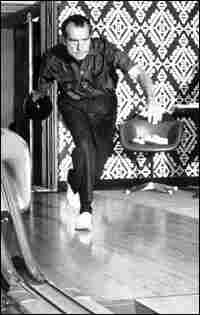 President Nixon, who championed the sport, bowls at the White House in 1969. Corbis hide caption 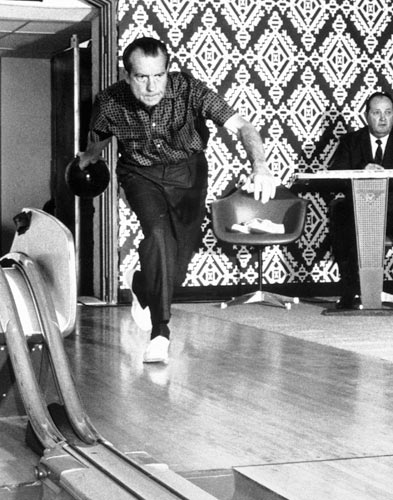 President Nixon, who championed the sport, bowls at the White House in 1969.

If the U.S. Bowling Congress leaves Milwaukee, it would be another blow to a city that has lost much of its blue-collar industrial heritage, from manufacturing to brewing.

OK, I've learned to accept that the Dodgers left Brooklyn and the Colts left Baltimore and NASCAR left Rockingham, and I even finally bore up to the reality that Brad actually left Jennifer.

But, I'm sorry, I simply can't take it if bowling leaves Milwaukee. Well, not all bowling, of course, but the national headquarters of the sport, the heart and soul, ye, the shirt and shoes of bowling, located in Milwaukee for more than a century, is threatening to pick up and move to Texas.

That benighted decision by the United States Bowling Congress is scheduled to be made by March 14.

As an erstwhile pin boy, I plead with the USBC to keep its sport in the city bowling made famous. After all, as Cracker Jack goes with baseball, as tailgating with football, so have bowling and beer and Milwaukee always gone together.

In fact, do you know how the old German-Americans used to play the game? Three teams would compete against each other. Have you ever heard of any sport where it's three teams? Everywhere else, it's two. But here's the way it worked with bowling. Two of the three teams would bowl against each other, while the third team went to the bar and drank beer. Then they'd rotate. Golf may have its 19th hole at the end of a round, but bowling had a moveable 19th hole.

No wonder bowling prospered long into the last century. Why, in wintertime, its big heroes, like Don Carter and Dick Weber, were as famous as basketball and hockey stars. As recently as 30 years ago, there were 9 million sanctioned bowlers in this country. But then the bubble burst. Now it's barely 2.5 million. Especially as tennis and golf moved out of the country clubs, poor bowling appeared to be de classe. Bowling shirts were the epitome of tacky and, oh, those multi-colored shoes that looked like something elves would wear.

It's funny, isn't it? The finest compliment you can pay an athlete is to call him a "blue-collar kinda guy." But the whole sport of bowling took it on the chin because it was considered too blue collar.

Bowling tried to upgrade its image. Suddenly, you were supposed to call alleys "lanes" and gutters "channels." Please. You are what you are. You might as well try to have baseball start calling dugouts "patios."

And wouldn't you know it: What president put alleys in the White House? Right — Richard Nixon. I interviewed President Nixon once. His big gripe against sports journalists? They didn't pay enough attention to bowling. Just bowling's luck — Nixon.

Then Robert Putnam came out with his famous treatise, Bowling Alone, which featured the decline in numbers of weekly bowling leagues to illustrate how Americans had stopped doing things together. Apparently, younger Americans would rather play videogames by themselves than go down to the alleys and rent some funny shoes and drink beer with their buddies.

And now they might move bowling central from Milwaukee to Texas. Hey, you might as well make Oshkosh the rodeo capital of America and transport the Alamo to Sheboygan. Bowlers of the world, unite! Have another brewski, and keep bowling where God meant it to be.