Accessibility links
U.N. Report Due on Iran's Nuclear Progress The United Nations Security Council is about to receive a report on Iran's nuclear program. The watchdog agency is expected to report that Iran has defied a U.N. order to stop enriching uranium.

The United Nations Security Council is about to receive a report on Iran's nuclear program. The watchdog agency is expected to report that Iran has defied a U.N. order to stop enriching uranium.

Okay, this is the day that U.N. nuclear monitors give a report on Iran, and there's not much doubt about what they're going to say. Iran has not stopped enriching uranium.

Now a U.N. Security Council resolution in December imposed limited sanctions on Iran in an effort to stop that enrichment and it threatened more sanctions if Iran did not quit by the deadline this week.

EMILY HARRIS: It's no secret that Iran is still enriching uranium. Iranian leaders say it's their right to do that under the global treaty governing nuclear technology because they say they are pursuing this program to produce electricity, not bombs.

The report expected today is likely to trigger, over the next few weeks, a push from the U.S. for the Security Council to impose sanctions against Iran that are broader than the sanctions that were approved in December. Those mainly target trade and assets of people thought to be tied to the nuclear program.

But even that narrow sanctions resolution was a hard sell, particularly to Security Council members Russia and China. A second resolution will also take time. And the head of the U.N. nuclear watchdog arm, the International Atomic Energy Agency, or IAEA, makes it clear he believes sanctions alone will never resolve this issue.

In an extensive interview this week, Mohamed ElBaradei told the Financial Times newspaper that everybody knows sanctions aren't the answer. And while intelligence reports suggests Iran is five to 10 years away from a bomb, a year or two of sanctions in counter-retaliations, ElBaradei said, would make terrorism and militancy worse across the Middle East.

He said a military strike would be catastrophic, not eliminate Iranian scientists' know-how and send Tehran into overdrive in pursuit of a nuclear weapon. The report from the IAEA will leave aside those judgments. It's a compilation of inspectors' findings.

Iran says it is looking for ways to get to the negotiating table to resolve this standoff, but it won't stop enrichment before talking and the U.S. says that's the minimum requirement. If any progress on negotiations is made in the next two weeks before the IAEA board approves the report, it could be amended. 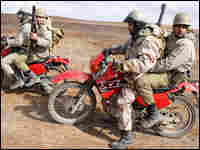 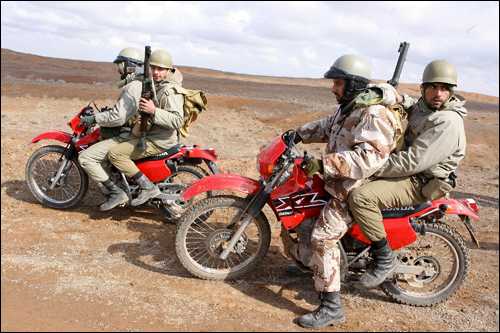 Iranian Revolutionary Guards carry rocket-propelled grenade launchers as they participate in wargames near Qom. Iran is conducting three days of land exercises in 16 provinces amid heightened tension over its nuclear program.

Iran is not expected to meet Wednesday's U.N. deadline to suspend its enrichment of uranium. Today, Iranian President Mahmoud Ahmadinejad said the nation is willing to discuss the issue, as long as there are no pre-conditions.

The International Atomic Energy Agency said Iran is installing centrifuges needed to create weapons-grade uranium, but also said construction of a large-scale facility is way behind schedule. Even Iran's pilot program has had some problems.

A key Iranian official is in Vienna to meet with the director of the International Atomic Energy Agency.

Iran is six months to a year away from being able to enrich large amounts of nuclear material. But intelligence reports indicate that the country is five to 10 years away from having a workable nuclear bomb.

Iran appears to have tried to speed up construction of an enrichment facility, but there are mixed reports about how fast the building is going up.

Recently, Ahmadinejad has toned down his rhetoric. Other Iranian leaders have warned that it may be unwise to confront the U.N. Security Council. Debate over the issue has opened up in Iran, and has even made it into Iran's conservative press.

Further complicating the calculus is Russia's announcement that it will slow construction of a nuclear power plant in Iran because of late payments. This development could indicate that Iran is strapped for cash, but it may also be Russia's way of applying diplomatic pressure.

The United States has brought pressure to bear, too, by sending a second aircraft carrier to the Persian Gulf. But top U.S. officials have said there is no intention of going to war with Iran.

If Iran misses Wednesday's U.N. deadline, it is uncertain whether the country will face heavier sanctions, as promised. If Russia, China, or the Europeans sense a crack in the Iranian position, the sanctions may be delayed.