Accessibility links
Blair: Britain Will Reduce Troops in Iraq Prime Minister Tony Blair tells Parliament that Britain will withdraw some of its troops from Iraq in the coming months and assume a reduced role around the southern city of Basra. The White House calls the announcement a "sign of success," not a retreat. 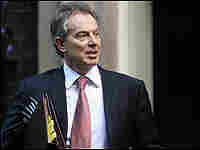 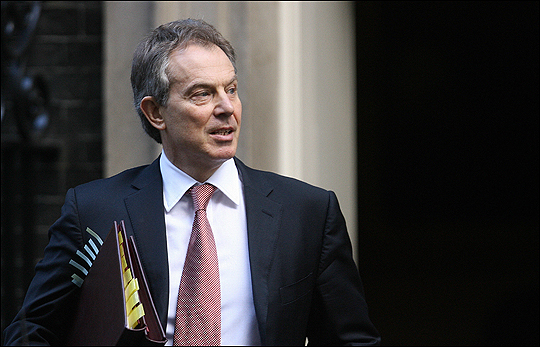 Prime Minister Tony Blair tells Parliament that Britain will withdraw some of its forces from Iraq in coming months and assume a reduced role around the southern city of Basra.

"The next chapter in Basra's history will be written by the Iraqis," Blair said.

The White House calls the announcement a "sign of success," not a retreat.

LONDON (AP) — Britain will withdraw around 1,600 troops from Iraq in the "coming months," aiming to cut its force to below 5,000 by late summer if Iraqi forces can secure the southern part of the country, Prime Minister Tony Blair said Wednesday.

British troops will stay in Iraq until at least 2008 and work to secure the Iran-Iraq border and maintain supply routes to U.S. and coalition troops in central Iraq, Blair told the House of Commons.

He told lawmakers that "increasingly our role will be support and training, and our numbers will be able to reduce accordingly."

Dependent on Iraqi capability Britain would draw down further, "possibly to below 5,000" once a base at Basra Palace is transferred to Iraqi control in late summer, Blair said.

"What all of this means is not that Basra is how we want it to be. But it does mean that the next chapter in Basra's history can be written by Iraqis," Blair said.

Denmark also said Wednesday it will withdraw its 460-member contingent from southern Iraq by August. The decision had been made with the Iraqi government and Britain, under whose command the Danish forces are serving near Basra, Danish Prime Minister Anders Fogh Rasmussen said. He added that Denmark would replace the troops with surveillance helicopters and civilian advisers.

And a government spokeswoman in Lithuania said the Baltic nation is "seriously considering" withdrawing its 53 troops from Iraq.

Defense Ministry spokeswoman Ruta Apeitkyte told The Associated Press that the Baltic country was considering not replacing the contingent when its mission ends in August.

"While the United Kingdom is maintaining a robust force in southern Iraq, we're pleased that conditions in Basra have improved sufficiently that they are able to transition more control to the Iraqis," Johndroe said.

Blair said "the situation in Basra is very different from Baghdad — there is no Sunni insurgency, no al-Qaida base, little Sunni on Shia violence," adding that the southern city is nothing like "the challenge of Baghdad."

"If Baghdad cannot be secured, the future of the country is in peril. The enemies of Iraq understand that. We understand it," Blair said.

Besides the United States, Britain and Denmark, the major partners in the coalition include South Korea (2,300 troops), Poland (900), Australia and Georgia (both 800) and Romania (600), according to the Brookings Institution.

The U.S., meanwhile, is implementing an increase of 21,000 more troops for Iraq, mostly in and around the capital. Analysts claim there is little point in boosting forces in the largely Shiite south of Iraq, where most non-U.S. coalition troops are concentrated.

Yet as more countries draw down or pull out, it could create a security vacuum if radical Shiite cleric Muqtada al-Sadr stirs up trouble.

A British withdrawal is not likely to have much effect on the stepped-up U.S. operation in Baghdad or the war against the Sunni-led insurgency focusing on Anbar province west of the Iraqi capital.

Blair, who has said he will step down by September after a decade in power, has seen his foreign-policy record overshadowed by his role as Bush's leading ally in the unpopular war.

As recently as last month, Blair rejected opposition calls to withdraw British troops by October, calling such a plan irresponsible.

"That would send the most disastrous signal to the people that we are fighting in Iraq. It's a policy that, whatever its superficial attractions may be, is actually deeply irresponsible," Blair said on Jan. 24.