Accessibility links
NATO's Afghan Trade School Underscores Challenge The official opening of a Western-built trade school in the southern Afghan province of Uruzgan this past weekend is part of NATO's "hearts and mind" campaign. But even with the base's fortifications, local officials say the students who attend aren't safe and are in danger of being killed by the Taliban. 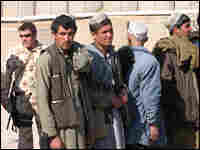 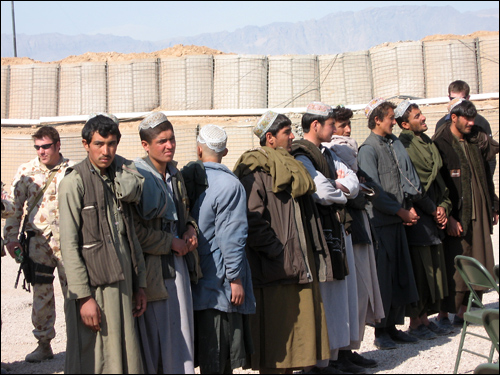 The first graduates of Uruzgan's trade training school at the NATO base near Tarin Kowt.

The official opening of the Western-built trade school in the southern province of Uruzgan this past weekend is part of the "hearts and mind" campaign NATO and U.S. led forces are trying to wage here in Afghanistan.

But the school highlights why that campaign is, by many Afghan accounts, failing. Built on the NATO base near Tarin Kowt and surrounded by barbed wire, sandbags and concrete barriers, the school is more a tale of the inability of NATO to bring security to Afghanistan, especially in the southern and eastern provinces.

Even with the fortifications, local officials say the students who attend aren't safe and are in danger of being killed by the Taliban, who by Uruzgani accounts, now control about two-thirds of the province through bribes, intimidation and violence — a figure that NATO disputes.

The head of the provincial Shura council complained that he can't even travel to the next district because of the growing Taliban control.

NATO soldiers serving in Afghanistan wear Dari-language patches that pledge "help and cooperation." For the past five years, Western nations have spent hundreds of millions of dollars trying to fulfill that pledge.

But getting Western help to Afghans is not easy. And when it doesn't reach them, the consequences can be dire.

Uruzgan's governor, a former Taliban official, failed to show up for the opening of the school here. His education director and chief of police also stayed away. And the governor declined to be interviewed.

Uruzgan legislator Mohammed Hashim Watanwal says that NATO isn't doing enough. He says after the years U.S.-led forces have spent cleaning the Taliban out of Uruzgan, his province is now falling back into insurgents' hands. He says the Taliban use bribes, intimidation and violence to force Pashtun elders to turn their villages over to insurgents.

But President Hamid Karzai's office rejects claims of corruption and deteriorating security. Spokesman Khaleeq Ahmed describes Uruzgan's governor as a "good man." He says things are much better in the province than they were a year ago.

"Uruzgan is one of the four provinces that is high on our list," Ahmed says, "and we are doing right now the most we can to improve this province."

Still, Watanwal accuses Karzai's government of having blinders on. He wants the United States and NATO to pressure the Afghan leader to take a closer look at what is happening in Uruzgan and other war-torn provinces. Otherwise, Watanwal says, he fears the Taliban will win.