Accessibility links
Departing U.N. Food Chief Reflects on World Hunger After five years, James Morris is leaving his post as head of the U.N.'s World Food Program. He says he will remain haunted by the knowledge that 400 million children are living in hunger. He says it's a problem that the world should be able to resolve. 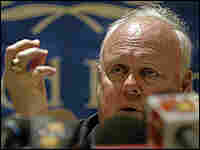 James Morris addresses the media in Kenya in March 2006, after an 11-day tour of regions suffering from drought. Tony Karumba/AFP/Getty Images hide caption 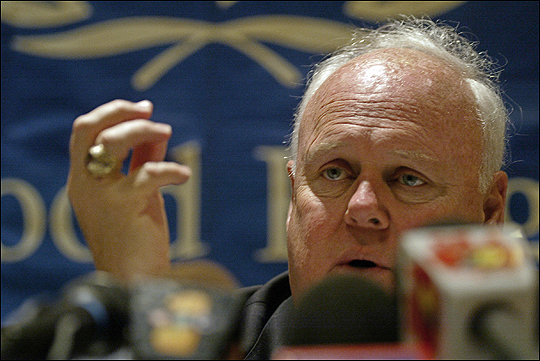 James Morris addresses the media in Kenya in March 2006, after an 11-day tour of regions suffering from drought.

James Morris, the retiring director of the U.N. World Food Program, has spent much of the last five years on the road in a job that he says takes a toll.

The numbers are staggering. Morris says there are 400 million hungry children in the world.

"Every single day 18,000 children die of malnutrition and hunger. These are issues we know how to solve. The world simply has to be more generous," he said. "We all have to do a better job."

The United States remains the biggest donor to the World Food Program. The Bush administration has tried for the past couple of years to give cash in addition to commodities, but Congress and the farm lobby have blocked those efforts, so the U.S. tends to give food.

Morris — who comes from Indiana, a farming state — is diplomatic about this. He says it helps to have cash to support local economies, though commodities are needed, too.

Morris says Arab countries are starting to become donors to the World Food Program. During his tenure China graduated from being a food aid recipient, and Morris hopes Beijing will now do more to help others. He sees big challenges ahead, with conflicts and natural disasters becoming more frequent.

He recalled the logistical nightmares he had getting food aid and other humanitarian assistance out to remote areas of Aceh in Indonesia after the Indian Ocean tsunami of December 2005.

"It's extraordinary, really," he said. "The average 7-year-old North Korean boy is eight inches shorter, 20 pounds lighter and has a 10-year-shorter life expectancy than his 7-year-old counterpart in South Korea. And to have this much disparity by age 7 — it's a terrible thing."

The former businessman has won plenty of praise from U.S. officials for the job he has done, even as the Bush administration calls for greater reforms throughout much of the U.N. system.

His successor, Josette Sheeran, is currently the U.S. undersecretary for economic, energy and agricultural affairs. Morris says she has a big job ahead.