Accessibility links
Artists' Masks Hid Wounds of World War I Soldiers An article in Smithsonian magazine examines how artists were enlisted to sculpt new faces for soldiers disfigured in World War I. 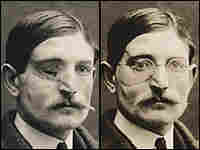 Technology and trench warfare made World War II soldiers especially susceptible to facial injuries and shattered limbs. This posed significant problems for physicians, who had never encountered disfigurement on such a scale.

They struggled to save patients who streamed in by the thousands. There was little time to think of aesthetics.

Then a group of artists — sculptors, in particular — became pioneers in plastic surgery by learning the art of skin grafting and the creation of masks to cover soldiers' wounds.

Caroline Alexander, author of an article in Smithsonian magazine that examines the medical advancements, tells Rebecca Roberts about the history of the mask-making unit.

War Is a Helluva Teacher 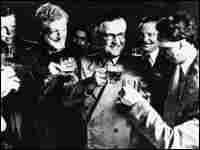 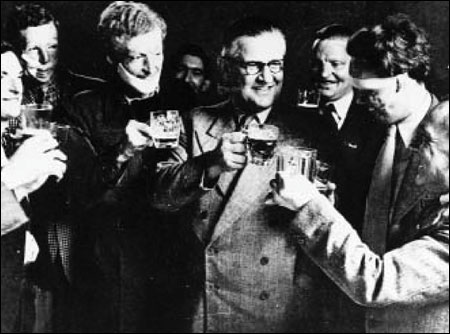 McIndoe joins his patients for a drink.

When soldiers from Iraq and Afghanistan have severe burns, they are sent to Brooke Army Medical Center in San Antonio.

Patients there often are disfigured and unrecognizable. Doctors and nurses work to keep the patients alive — and then help them cope with the pain of life-changing wounds.

All Things Considered host Melissa Block visited the center to talk with its staff about their work. Hear that story. 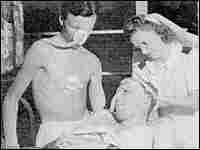 Bill Foxley (standing) is shown in the second stage of his skin graft. This would become his new upper lip. With him is Canadian patient Stu Duncan and Canadian nurse Mons Stapleford. Queen Victoria Hospital Foundation Trust Museum hide caption 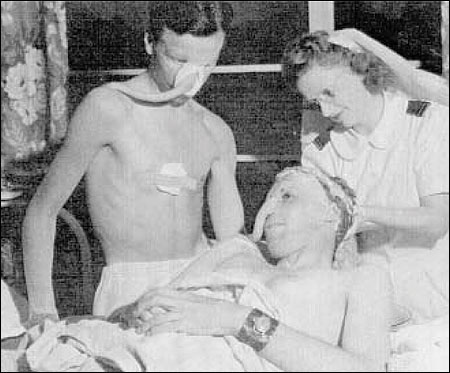 Bill Foxley (standing) is shown in the second stage of his skin graft. This would become his new upper lip. With him is Canadian patient Stu Duncan and Canadian nurse Mons Stapleford. 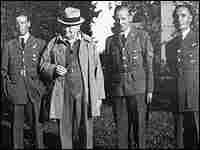 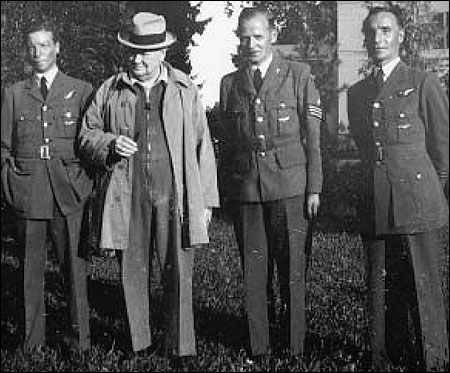 Soldiers recovering from burns suffered in Iraq owe a debt to the members of the Guinea Pig Club.

That's how badly burned Royal Air Force pilots from World War II referred to themselves. When their planes crashed, they were bathed in the short-lived fire of aircraft fuel. Although they were able to parachute out, the skin on their hands and faces was burned off. As doctors struggled to care for the men, they made major advances in treatment for burn victims — in the medical arena and in the psychological arena, as well.

Within weeks of the start of the Battle of Britain in 1940, burned pilots were transferred to surgeon Archibald McIndoe at his East Grinstead hospital — one of only four plastic surgeons in Britain. He faced an unprecedented challenge. The pilots had not been expected to survive.

"These are the very elite of the British military, and they are in the most appalling state," says Emily Mayhew, a historian at Imperial College London who researches the intertwined history of plastic surgery and war. "No one has ever seen anything like this. These are handsome, brave men who are defending the country, and the whole image of them is catastrophic."

The pilots' wounds were dubbed "Airman's burn." Before World War II, most patients with severe burns — typically children and the elderly scalded by boiling water or falling into cooking fires — died within 24 hours. Their bodies shut down from dehydration, unable to handle the shock of losing massive amounts of blood and protein at the burn sites. Treatment was typically to give morphine, and watch the patients slip away.

But one positive side effect of war can be found in the sheer number of patients with a certain type of injury. In that instance, major advances can be made in medical treatments.

"That's the difference between war and peace," says Mahew, author of the book, The Reconstruction of Warriors. "As a surgeon in peacetime, you see one or two serious burns a year. Between 1939 and 1945, McIndoe has, in all, 5,000 burn patients and 600 total facial reconstructions."

The first breakthroughs in plastic surgery for facial injuries actually dates back to World War I. No previous war had relied on trench warfare to the same extent. The result was a unique set of injuries.

"People put their faces up over the trenches and they got shot," Mayhew explains.

Allied doctors had turned to a textbook on facial injuries from the American Civil War for ideas. "The results were so awful, they decided not to show the book to anyone," says Mayhew. "They were worried it would have put doctors off from going to the Front."

The location of the wounds meant most of the patients were sent to ear, nose, and throat doctors like New Zealander Harold Gillies. He and a band of dentists began to pioneer the first systematic techniques for dealing with such injuries.

The first task was to find a way to anesthetize the patients. The usual rubber mask over the mouth wouldn't work. The mouth was typically the site of the injury. It might even be missing. So the doctors figured out how to insert a tube down the throat. Bone- and skin-grafting also became real disciplines.

"It's really about having a lot of patients," says Mayhew. "[Doctors] learn very quickly what works and what doesn't."

McIndoe was a cousin of Gillies and trained with him during peacetime. Gillies' advances in skin-grafting would help McIndoe rebuild the faces of his RAF patients. But before he could get to skin grafts, he had to stabilize his patients.

Advances in shock treatment in the late 1930s — keeping the body hydrated and nourished through plasma and protein infusions — got McIndoe's patients past the first critical 24 hours. The next threat was infection.

One of McIndoe's main discoveries was that the standard treatment for minor burns could be dangerous on hands and faces, causing infection, terrible scarring and even blindness.

"It's a chemical that you painted on, and it formed a gray shell," Mayhew says. "You looked like an armadillo."

The idea was that the burn would heal under the shell. Instead, it caused hands to contract and tissue to die; some of McIndoe's initial patients spent terrible moments having these chemical shells peeled off them.

McIndoe resorted back to basic first-aid principles: keep the wounds open, wash with saline and regularly change the dressings. When the burns had healed enough, McIndoe moved on to reconstructing the patients' faces and hands.

From there, McIndoe said he had little to guide him but surgical instinct and inspiration: "When I looked down on the operating table and saw I had to replace a pair of burned eyelids for a boy of 21, I felt God come down my right arm."

Mayhew credits McIndoe with another medical revolution: He recognized that recovery involves more than the physical body.

"It's not just a question of putting a face back together," says Mayhew, "but enabling someone to function as a social creature."

In the past, most disfigured vets kept out of public. But not McIndoe's patients. The pilots called themselves the Guinea Pig Club, and McIndoe made sure they were seen as celebrities. Working with the RAF and the town around the southern England hospital, McIndoe began a campaign to make socializing with the Guinea Pig Club part of the war effort. It started with invitations to teas and write-ups in newspapers. Soon, Guinea Pig Club members were frequent and honored guests at theater and film openings.

McIndoe's motivation was his patients' overall well-being. The RAF had an additional concern. It had spent a lot of money training these pilots — they were on the cutting edge of an expensive technology — and needed them to return to duty.

The RAF was quick to promote public acceptance of its disfigured heroes, and that was a leap for the military, says Mayhew. An RAF pamphlet stated of its burned airmen: "The idea here is to return him home when he is full of pride in his prowess, inclined to mix with his fellows and to show off his abilities, rather than prematurely to send him into an environment of sympathy instead of encouragement."

Across the pond, American pilots weren't as fortunate. In her oral history in Studs Terkel's book, The Good War, military nurse Betty Basye Hutchinson says civilians demanded that burned American pilots be isolated. "Why can't they be kept on their own grounds and off the streets?" read one letter to the newspaper.

Indeed, modern militaries still have a hard time embracing the psychological lessons that McIndoe learned — that servicemen with traumatic, disfiguring injuries heal faster and fare better when they feel accepted and retain a purpose in life. That wasn't always the case for troops injured in the first Gulf War, says Lt. Col. Danny Davison, a psychiatric nurse at Brooke Army Medical Center in San Antonio. He says the military only recently began to provide money to immediately unite burn victims and other injured troops with their families. Now, he says, they do an excellent job notifying family members and assisting them with travel and housing.

"I can't emphasize how important that is," Davison says. "When they wake up in ICU, they want to see their loved ones." And that, Davison says, is the first step in motivating these soldiers to rejoin society — as any member of the Guinea Pig Club would attest.