Accessibility links
Students Uncertain About Historically Black Schools The number of black students applying to historically black schools is on the decline. This generation of black students likes the idea of not being in the minority at college, but doesn't necessarily feel the same allegiance to these schools.

This is the fifth report in a seven-part series. 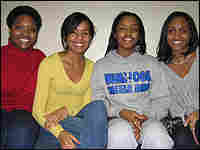 Jewel Burks and her friends are among the best and brightest at Hume-Fogg Academic High School — a school in Nashville, Tenn., that's known for its exceptional students.

Burks heads the student council and is a member of numerous clubs. Her peers assume she's looking at Ivy League colleges, and those expectations have pressured her into rethinking her dream school, Hampton University, a highly regarded and historically black Virginia school.

"In my family, Hampton is, like, the best school you can go to, you know?" she says. "But when I am around people that are not from my background, they ask me, 'Where is that?'"

Burks says the decision came down to, "Do I want to go to Columbia — where, anytime I said it to anyone, they will know what I am talking about? Or do what I want to do what's best for me?"

The Allure of Other Universities

Burks and her friends often gather during their lunch hour at Hume-Fogg. They each have an arm-long list of schools to which they applied – from the local Middle Tennessee State University to top-flight dream schools, such as Yale and Harvard. But they all have reserved spots at historically black universities, such as Fisk University in Nashville and Spelman College in Atlanta.

None of the girls likes to describe these schools as an "alternative" option, because that implies that the academics at these schools aren't as good. But when talking about life at a black university, they mostly speak of the social benefits.

Pha'lesa Patton, a 17-year-old cheerleader at Hume-Fogg, says she has never had any trouble fitting in with her white classmates. But she is tired of being only one of just a handful of black faces in her honors classes.

"Here, everybody is in the African-American studies club — not because they really want to be in the club, but because that's where all the black people are," Patton says.

"If you go to a white school, and you're, say, one of a few black people, people put that on you. They'll make that your burden – to be the face of black people," Burks says. "So if you mess up, it's like, 'Oh, that's how black people are.' But at a historically black college, you don't have to worry about that."

Another friend, Keziah Tetteh, says that concern never goes away, no matter where you go to school. She is the daughter of a Ghanaian immigrant, who tells her that she will always be the minority wherever she goes and that going to a white school will prepare her for that.

"At an HBCU," she says, referring to the common abbreviation for historically black colleges and universities, "even though you will have contact with people of different races, it won't be the reality that would really be in the work world."

Tetteh has picked Lake Forest College, a predominantly white school outside Chicago. Meanwhile, another friend, Aleesa Mann, is considering prestigious schools including Georgetown, Princeton and Vanderbilt — as well as Fisk University, the HBCU where her father is a professor.

"I've heard stereotypes that they are unorganized and slow, not always up on the deadlines, and that you get really distracted at a HBCU by the social organizations and activities," she says.

Mann gets conflicting advice from her parents, who both attended Vanderbilt. Her mother has told her outright that they have little connection to their alma mater and did not make very many friends there. At the same time, Mann's parents keep reminding her that a school's name recognition can be a springboard to a career. Mann says she is still thinking about schools such as Howard University in Washington, D.C., and Hampton because she likes the idea of the tradition.

"Really, I think people don't understand that HBCUs are not just about being all black. You know, it wasn't always easy for us to get an education somewhere," says Mann. "It's a history."