Listen
Exonerated Prisoners Adjust to Life on the Outside 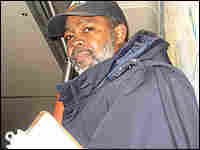 Calvin Johnson rides on a MARTA train, Atlanta's rail system. He began working for MARTA in August 1999, just four months after his release from prison. He was the 61st person in the United States to be exonerated by DNA testing. Kathy Lohr, NPR hide caption 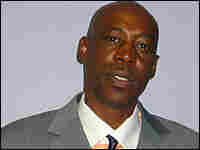 Willie "Pete" Williams readies for his exoneration hearing in Atlanta last month. The court ruled in his favor, releasing him after 22 years of wrongful imprisonment. Courtesy of the Georgia Innocence Project hide caption

"Anger is not a trait I was born with. It began in prison, and it grows each day. After ten years my anger has started to assert itself."

Willie "Pete" Williams spent 22 years in a Georgia prison for a rape he did not commit. DNA evidence recently exonerated him — but not before he spent half his life in jail.

"Being free — there's nothing that can actually replace that," says Williams, who was released in January. "Freedom, it means everything."

The long years of incarceration have taken their toll on Williams, who continues to question whether his newfound freedom is real.

"I still have problems with that," he says. "I wake up 2 or 3 o'clock in the morning, taking a look around, making sure that I'm not inside of a prison."

After a month of constant media attention, he's trying to figure out how to start his life over. He says he wants what everyone on the outside has: a job, a home and a woman who cares about him. One of his teachers is another man from Georgia, released from prison seven years ago.

The Challenge of Starting Over

Calvin Johnson was falsely convicted of rape and received a life sentence. He served 16 years before becoming the first man in Georgia to be freed by DNA evidence in 1999.

"Everything is new," says Johnson. "I mean, you come out, and it's a big world. Sometimes, you just want to look. You catch yourself just looking at everything, just watching people, actions, how to dress — just to see what's going on around you."

Not long after he was released, Johnson began working for Atlanta's rail system, the MARTA. As a supervisor, his job is to check in at the stations and make sure things are running smoothly. Johnson is so thrilled with his job and with his new life that he smiles almost constantly. He says he has a lot to smile about. He had some big advantages, including strong family support and a college education.

In prison, Johnson did hard labor. He worked in the prison library and with men in isolation. On his resume, he credited the state of Georgia as his employer.

Lisa George of the Georgia Innocence Project says exonerated prisoners are often released with little to support them in their new life of freedom.

"We watch these guys walk out of the courtroom, and everything they have to show for decades of their lives is contained in a Tupperware box," George says.

"If you walk somebody out of the courtroom, having gotten them exonerated after 20 years, and you shake their hands on the courthouse step and say, 'Thank you, have a nice life,' you're setting them up for failure," she says.

Compensation for Life Spent in Jail

The Georgia Innocence project took Calvin Johnson's story to the state legislature; ultimately, he received a half-million dollars. According to the national Innocence Project in New York, about half of those exonerated by DNA have received some kind of compensation — from a few thousand dollars to as much as $12 million. Twenty-one states have laws that allow such payments, but most hear each case individually before deciding whether to pay anything at all.

Johnson says he knows he's one of the lucky ones. He faced a number of challenges: learning how to use computers and cell phones, opening up a bank account and even getting a fair deal on his first apartment. The manager wanted to double or triple his security deposit.

Johnson persuaded the manager to rent the apartment at the regular rate. He says the key was never letting let the small problems deter him from his true goals.

"I have a steady job. I'm a homeowner. I have a lovely wife. I have a daughter. I have a little dog that wags his tail," he says. "Basically, you could say I'm living the American dream."

Johnson says he still catches himself looking around sometimes, unsure that his life is real.

After spending 16 years in prison for a crime he did not commit, Calvin Johnson was exonerated in 1999 with the aid of DNA evidence. In 2003, he published a book about his experiences in prison:

There is a threshold after which math becomes detestable; and no one counts down from twenty-five years. For the lifer prison is a series of shorter countdowns and letdowns. All dates are approximate: release, transfers, parole hearings - everything is subject to change according to rules that no prisoner can fathom.

The men with short sentences are the precision timekeepers of prison life. They are anxious about every lawyer appointment, every visit, and they still have faith in the generosity of the parole board. You can see the days and weeks tick across their faces. To the lifer their waxing grins have all the charm of a stomach flu.

After a decade in prison I am able to entirely suppress the numbers. I try not to keep track of the months until my parole hearing: no mental calculation of the years remaining in a life sentence. But as my sense of time wanes, my sense of indignation grows. Each day I wake to a silent rehearsal of the absurd "facts" surrounding my case.

I am innocent. I have filed appeals at every level, and as always I am denied. The parole board sends smiling representatives who give me hope, but during my hearings they ask me over and over again, "What can you tell us about the crime?" Each time I go up, I am denied parole, and rather than shortening the period between hearings, they lengthen it. Everyone urges me to join the Sex Offenders Program, but membership requires a detailed admission of my crimes.

My jaws ache from clenching, but I repeat my silent mantra through gritted teeth: I will not lie, I will not condemn myself as they have condemned me — if I have no hope for parole, so be it. I will not slander myself.

Anger is not a trait I was born with. It began in prison, and it grows each day. After ten years my anger has started to assert itself. For most of my life I took pride in being easygoing, slow to react, and naturally calm. But I have changed. I have become unsociable and quick to argue — but who wouldn't? I wake up each morning to prison bars, in the company of men I would not choose as friends. My time — and my life — are totally controlled and hopeless. As soon as I open my eyes I am mad. The gnawing of my stomach now accompanies the dawn of each new day.

I am so angry that complete madness cannot be far away. Bitterness is a drug, an addictive substance — it haunts me each minute, whispering its catechism of complaints. As much as I try, I cannot calm the increasing volume of those voices. I cannot reason my way out, because my anger is so reasonably constructed — I am innocent, I have been railroaded, and no one will help me. I have followed all the rules, been patient in my appeals for help — and nothing. Nothing! My case for hatred is airtight, and the facts arrange themselves in my mind without effort. It is consuming me and I am losing myself. Up until now I have contained the rage beneath a thin shell of control, but now the surface has cracked.

Excerpted from 'Exit to Freedom' by Calvin C. Johnson, Jr. and Greg Hampikian Copyright © 2003. Excerpted by permission of University of Georgia Press. 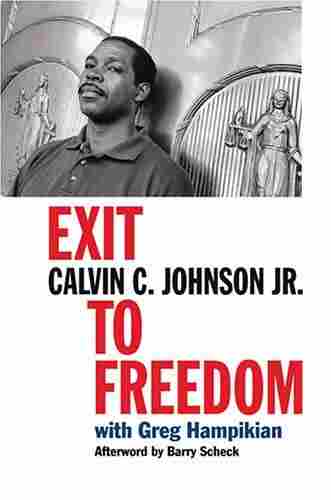