Accessibility links
Creating Our Own Happiness Wayne Coyne is singer and guitarist for The Flaming Lips, an indie-rock band he founded. Coyne believes happiness isn't a cosmic coincidence, but something we have the power to make within ourselves.

Listen
Creating Our Own Happiness 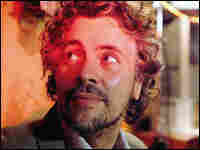 Wayne Coyne is singer and guitarist for the Grammy Award-winning rock band The Flaming Lips. He wrote and directed Christmas on Mars, a science-fiction film featuring the group. Coyne and his wife, Michelle, a photographer, live in Oklahoma City. Michelle Martin-Coyne hide caption

I believe we have the power to create our own happiness. I believe the real magic in the world is done by humans. I believe normal life is extraordinary.

I was sitting in my car at a stoplight intersection listening to the radio. I was, I guess, lost in the moment, thinking how happy I was to be inside my nice warm car. It was cold and windy outside, and I thought, "Life is good."

Now, this was a long light. As I waited, I noticed two people huddled together at the bus stop. To my eyes, they looked uncomfortable; they looked cold and they looked poor. Their coats looked like they came from a thrift store. They weren't wearing stuff from The Gap. I knew it because I'd been there.

The couple seemed to be doing their best to keep warm. They were huddled together, and I thought to myself, "Oh, those poor people in that punishing wind."

But then I saw their faces. Yes, they were huddling, but they were also laughing. They looked to be sharing a good joke, and suddenly, instead of pitying them, I envied them. I thought, "Huh, what's so funny?" They didn't notice the wind. They weren't worried about their clothes. They weren't looking at my car thinking, "I wish I had that."

You know when a single moment feels like an hour? Well, in that moment, I realized I had assumed this couple needed my pity, but they didn't. I assumed things were all bad for them, but they weren't. And I understood we all have the power to make moments of happiness happen.

Now, maybe that's easy for me to say. I feel lucky to have fans around the world, a house with a roof and a wife who puts up with me. But I felt this way even when I was working at Long John Silver's. I worked there for 11 years as a fry cook. When you work at a place that long, you see teenagers coming in on their first dates; then they're married; then they're bringing in their kids. You witness whole sections of people's lives.

In the beginning, it seemed like a dead end job. But at least I had a job. And frankly, it was easy. After two weeks, I knew all I needed to know, and it freed my mind. The job allowed me to dream about what my life could become.

The first year I worked there, we got robbed. I lay on the floor. I thought I was going to die. I didn't think I stood a chance. But everything turned out all right. A lot of people look at life as a series of miserable tasks, but after that, I didn't.

I believe this is something all of us can do: Try to be happy within the context of the life we are actually living. Happiness is not a situation to be longed for or a convergence of lucky happenstance. Through the power of our own minds, we can help ourselves. This I believe.