Accessibility links
The Foundations of Disco at Its Finest The Sisters Love wasn't a disco act, but it laid down the sound and rhythm that would influence the style's breakout success in the mid-'70s. The group's members were innovators, but they were also survivors, created by and from former members of The Raelets, Ray Charles' backup singers.

Give Me Your Love 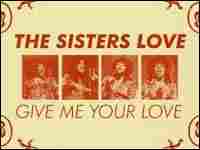 The cover of The Sisters Love's Give Me Your Love. hide caption

It's not difficult to understand some of the venom against disco. By the end of the '70s, its omnipresence turned the genre into a caricature of itself, especially post-Saturday Night Fever. With its popularity came the pressure to mint a disco hit, leading many otherwise credible artists to take ill-advised turns under the mirror ball, often with unfortunate results. However, the backlash had a regrettable effect of damning the whole style for the shortcomings of a few. A great disco song — and there are countless — is like a revelation; it makes apparent in an immediate and powerful way why the genre took off to begin with. (No, Donna Summer's simulated orgasms on "Love to Love You, Baby" weren't the sole reason.)

The Sisters Love technically wasn't even a disco act, but its sound, especially on "Give Me Your Love," is distinctly proto-disco, laying down the foundations in sound and rhythm that would influence the style's breakout success in the mid-'70s. The group's members were innovators, but they were also survivors, created by and from former members of The Raelets, Ray Charles' backup singers. The 1973 incarnation of The Sisters Love that recorded "Give Me Your Love" was made up of former Raelets Lillie Fort and Gwendolyn Berry, plus newcomers Jeannie Long and lead vocalist Vermettya Boyster.

Released as a B-side on MoWest — the Motown subsidiary created after the label's infamous relocation from Detroit to Los Angeles — "Give Me Your Love" was a remake of a Curtis Mayfield song, from his best-selling Superfly soundtrack. That blaxploitation-era connection is clear once the rousing brass opening gives way to the song's sinuous rhythm. It's as exemplary an example of a groove as could be imagined — a subtly dense layering of string arrangements, horn hits, chicken-scratch guitars and, most notably, a darting flute melody that becomes the song's signature, echoed by the Sisters' background harmony.

The best surprise comes once Boyster's vocals drop in. Hers present an interesting contrast to Mayfield's sweet falsetto: Boyster's tone is anything but honeyed. Instead, there's a ragged edge in her alto, reminiscent of Esther Phillips but even raspier. Compared to the accusation that disco only churned out mechanically sanitized, soulless voices, here's a vocal aching with flesh-and-blood presence, a bold thread of pathos woven in.

Surprisingly, "Give Me Your Love" went nowhere upon its release, and within a year, the group had disbanded. Yet forward-looking disco DJs kept it close in the crates and the song was given new life, seven years later, once DJ Danny Krivit created a 12-inch edit that became a cult club hit. Through that comeback, the song has remained popular enough that the album bearing its name was released late last year — an unexpected resurrection for a disc that deserved better in its day.

Album
Give Me Your Love
Artist
The Sisters Love