Accessibility links
Christopher Janney, Sculpting Sound Christopher Janney, an architect and jazz musician, combines both passions in "sound sculptures." His interactive sound and light installations are found in airports in Dallas, Miami and Sacramento — and soon at Logan in Boston.

Christopher Janney, an architect and jazz musician, combines both passions in "sound sculptures." His interactive sound and light installations are found in airports in Dallas, Miami and Sacramento — and soon at Logan in Boston.

Christopher Janney likes to see what sound can do and I mean see literally. He once attached a microphone to Mikhail Baryshnikov's chest so that the Russian dancer could actually perform on stage to the score of his own heartbeat.

SIMON: Making the human heart into a percussion instrument. Years later, Chris Janney overlaid his own voice reciting jazz skat and medical phrases so that the heart became one instrument in a kind of symphony.

SIMON: Now there's a good chance that you've seen and heard the work of Chris Janney. His interactive sound and light installations have been in airports in Dallas, Miami and Sacramento, and in other public spaces around the country. There is now a book about Chris Janney's work. It's called "Architecture of the Air." Chris Janney joins us from our studios in New York. Chris, thanks very much for being with us.

SIMON: How do you feel about that phrase that seems to attach itself to you, sound sculptor?

SIMON: May I ask a question about when you - how did you explain it to him?

Mr. JANNEY: Oh, no, I mean he was - he had known about the piece because I actually first set it on Sarah Runner(ph), the principal dancer from Twyla Tharp about 10 years before. And so it was quite a well-known piece within the dance world. And when he was putting together an evening of solos he actually called and asked if Sarah and I would set the work on him. I must say, it was quite an interesting phone call because I didn't believe it was him at first.

SIMON: I want to listen to another sound installation, another installation that you have opening I believe this month at Logan Airport in Boston. It's called "The Sound Environment of New England." We have a recording. Let's listen for a moment.

(Soundbite of "The Sound Environment of New England")

SIMON: I hear boats, gulls, a fog horn, a xylophone, a pan flute and bells. Anything I'm missing?

Mr. JANNEY: No, but the part that you are missing is actually these two nine-story towers of colored glass. These are new towers that were built as part of central parking and I designed the towers to be these big environments where you come into - you get our of your car, you walk into the tower to go to whatever floor you need to go to to get into the terminal. You're sort of immersed in the color shadow from the glass and then you hear these - there's actually eight different environments, that being one of the Cape Cod, the shores of Cape Cod, and as you walk up and you push the button to call the elevator, that's when you hear the melodic flute or sometimes other different instruments. So you're actually calling the elevator when you hear those sounds.

SIMON: I notice no moans from Red Sox fans. That says New England to me.

Mr. JANNEY: We look to the future.

SIMON: How do you put something like that together? What do you run through your mind? What do you decide to use, not to use? Are there certain sounds that you thought would be inappropriate?

Mr. JANNEY: Well, no. I think that the general idea, again, as an architect is, you know, trying to add another layer of material within a space. And in this case a layer of sound or a layer of colored light that will change throughout the day. So I'm trying to find ways to make public spaces continuously refreshing. And in that sense, because I'm in Boston, the piece is in Boston, I try to think of things that are not only site specific but sound specific. So when you're coming in or going out of the airport, hopefully this helps to familiarize you with what part of the country you're in.

SIMON: For someone who's passing through the airport, I can see where this would be a neat feature, but what about people who work there? Do they begin to find it repetitive?

Mr. JANNEY: Well, you see, that's the whole trick in how you compose a piece, because it's actually mixed in real time. So it's not a tape. It's actually a series of sound files; there's a whole bank of different kinds of birds and a whole bank of different kinds of environments, whether it's the wind in the trees or the ocean waves. And so all of those things are continually mixed in different ways, depending upon the time of day and the activity in the space. So you might come through there at 10:00 a.m. and hear one kind of environment with one kind of bird and one kind - other kind of sound environment and come back two hours later and it'll be entirely different.

Mr. JANNEY: Well, I think a good example is actually in my piece that's in the New York City subway, the piece called "Reach" at 34th Street.

Mr. JANNEY: Yes. Correct. Down on the 34th Street subway where there's 112,000 people a week move through this space. But you know, you're down underground in this man-made space. You don't really have any sense of direction. You certainly don't have a sense of the time of day. You know, there's a fair amount of anxiety being in an underground subway platform, waiting. And so my sound environment down there is actually sounds that are pulled from different rain forests around the world mixed with, again, melodic instruments, you know, bamboo flutes and marimbas.

SIMON: Let me hold you up a bit, like the number seven train often is.

SIMON: And let's roll this in and get you to talk about it as we hear it.

SIMON: What are we hearing?

Mr. JANNEY: Well, so this is a good example of basically somebody is reaching up and waving their hands in front of some photoelectric sensors that I have placed in this bar overhead. And the sensor is - they're triggering those melodic instruments and also those environmental sounds. So the idea is that...

SIMON: They trigger them by kind of waving their hands?

Mr. JANNEY: Yeah, they're actually breaking a beam of light. But I think the whole idea is like, you know, in a place like a subway environment where I'd say there's a fair amount of what I call urban alienation - people really just want to keep to themselves and they don't really want to socialize in that sense - this becomes a social foil and allows total strangers to interact with one another and interact in a creatively playful way. And I think that's an important thing in an urban context.

Mr. JANNEY: Well, I like to say that my work is a cultural barometer, Scott. So your temperature has been taken.

SIMON: Without getting you to tip your hand, is there a public space somewhere in this world you'd really like a chance to do something for?

Mr. JANNEY: Well, actually, you know, when I was in architecture school in the late '70s and loved Roman architecture, classical architecture, and I'd always loved the Spanish steps in Rome, the Piazza de Spagna, and so then when I created really what was the first interactive sound piece, public art piece called "Sound Stair," it was always my dream to get to the Spanish Steps. And it turned out that I was booked on a tour that went to Essen, Germany and into London, into France. And I said, look, I'll do all those jobs if you can also get me the Spanish Steps. And so he got me the Spanish Steps. So other spaces that I've looked around - Trafalgar Square in London I've never done a piece. I'd love to do a piece there. You know, there'd be that nice La Trocadero in Paris. You know, big, grand public spaces which I could use, I could plug sound into and sort of reveal a new hidden dimension, a new hidden music, as I like to say, within the architecture.

SIMON: Chris, it's been good talking to you.

Mr. JANNEY: Well, nice to talk with you, Scott.

SIMON: Christopher Janney, he's the subject of a new book about his work titled "Architecture of the Air." And a sound installation of his opening soon if you live in Boston at an airport near you. 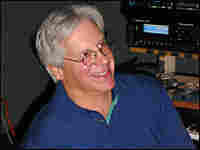 An artist educated at MIT has a unique perspective on his trade.

Using lasers, heart monitors and other technological gadgets, Christopher Janney explores the nature of creativity and the origin of the soul. 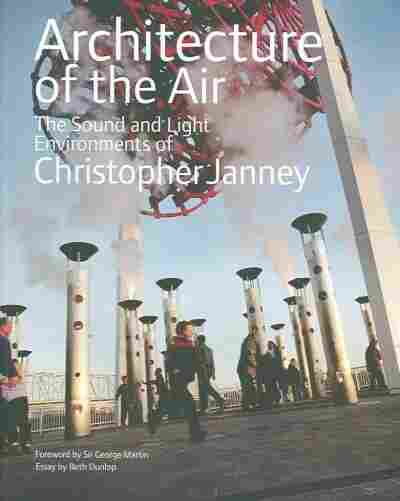 Architecture of the Air

The Sound and Light Environments of Christopher Janney