See the best and worst fashions on this year's red carpet. 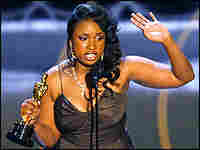 After five nominations for the prize during a five-decade-long career, acclaimed filmmaker Martin Scorsese finally received a best director Oscar Sunday night. The auteur won the honor for The Departed, a mob epic that also nabbed the best picture award.

Standing onstage to accept the first Oscar of his career, Scorsese received a standing ovation and pretended he couldn't believe it.

"Could you double-check the envelope?" Scorsese asked jokingly. After all, the 64-year-old filmmaker had been nominated a total of seven times — twice for screenwriting.

Apparently, Academy voters also thought it was about time to honor Scorsese, who was previously nominated for Raging Bull, Goodfellas, The Last Temptation of Christ, Gangs of New York and The Aviator. Backstage, Scorsese told reporters what he was thinking when his name was called.

"Good thing I didn't get it before. It's a good thing I waited," he said, adding, "Maybe it would have changed the kind of movies I made or something. I couldn't trust myself. I don't know if I was strong enough if I had gotten it before, quite honestly, you know, and I'm glad that it went this way."

The Departed won four of the five Oscars for which it was nominated. But the most-nominated film, Dreamgirls, only came away with two awards. One of them went to failed American Idol contestant Jennifer Hudson for best supporting actress — for her role as a singer who doesn't get a chance to become a star.

In accepting the award, Hudson — who won for her first-ever film role — said the story hit close to home.

"I didn't think I was going to win but... wow," Hudson said. "If my grandmother was here to see me now, she was my biggest inspiration for everything, because she was a singer and she had the passion for it. But she never had the chance, and that was the thing that pushed me forward to continue."

Dreamgirls had earned three of the five nominations in the best song category. But it lost to Melissa Etheridge and her anthem about global warming — I Need to Wake Up. Backstage, Etheridge told reporters she was a bit surprised by the upset.

"Dreamgirls is what music and movies is about," Etheridge said. "It's a musical. It's what I grew up loving," adding, "But that's the way it goes, I guess."

Etheridge's song came from the soundtrack for this year's best documentary feature, An Inconvenient Truth, which chronicled former Vice President Al Gore's campaign to save the environment. Onstage, Gore thanked Hollywood for spreading his go-green message. Earlier while onstage with fellow environmental activist and actor Leonardo DiCaprio, Gore played along with the persistent questions about whether he'll make another run for office.

"My fellow Americans, I'm going to take this opportunity right here and now, to formally announce my intentions to..." Gore said before the orchestra broke in and he walked off, laughing arm-in-arm with DiCaprio.

This year's awards had a decidedly global cast. Winners accepted in a variety of languages: Spanish, Chinese and Italian. And the films dealt with such topics as the human cost of the diamond trade in Africa; World War II from the Japanese perspective; a little girls' reaction to the Spanish Civil War; Queen Elizabeth's reaction to the death of Princess Diana; and four families drawn together by tragedy in Morocco.

Forest Whitaker won best actor for his portrayal of the notorious Ugandan dictator Idi Amin in the The Last King of Scotland. Whitaker delivered one of the most emotional speeches of the night:

"When I was a kid, the only way that I saw movies was from the backseat of my family's car at the drive-in. And it wasn't my reality to think I would be acting in movies. So receiving this honor tonight tells me that it's possible. It is possible for a kid from East Texas, raised in South Central L.A., in Carson, who believes in his dreams, commits himself to them with his heart, to touch them and to have them happen."

"I feel in a sense like a hypocrite, because I don't believe in competitions between artists," Arkin said.

He may be the only one. 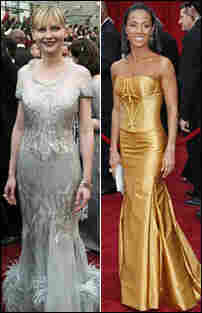 SLIDESHOW: the Good, the Bad and the Fabulous
toggle caption

There are few times in life when one can count on the eternal verities, but Academy Awards night is one of them. With 500 feet of red carpet and enough bling to open a Cartier store on the side, the entrance to the Kodak Theatre provides us with enough beauty, if not truth and goodness, to last until... well, next year. There were gowns of good taste aplenty, and great presence. Penelope Cruz, Kate Winslet, Gwyneth Paltrow and Cate Blanchett were standouts — but those of us of a certain age can't help but wax nostalgic for another time, when you never knew what Cher was going to turn up in.

Part of the thrill of watching the Academy Awards is realizing that we really do live in a different world from the people in Hollywood. Part couturier confab, part freak-show, the Oscars are as much middlebrow fantasy as they are peer tribute. But with stylists and designers now engineering practically every inch of the show, the red carpet just isn't the wild, wacky, unpredictable place it used to be. Still, it's always a fun fashion ride.