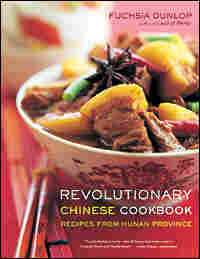 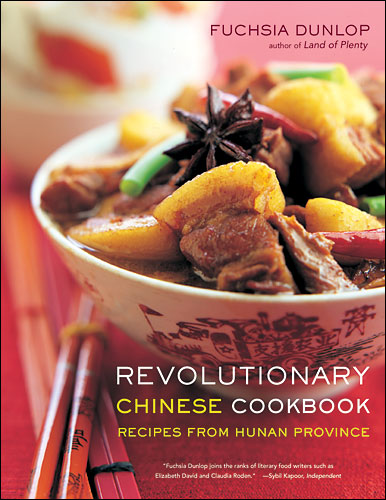 China's Hunan Province has long been recognized for its spicy cooking, and for its revolutionaries.

In Revolutionary Chinese Cookbook, chef Fuchsia Dunlop pays homage to some of the area's most well-known dishes and provides a taste of the history and culture that surround them.

The recipes are from Hunan, the home province of Mao Zedong, who led the Chinese Communist Revolution.

Dunlop is fluent in Mandarin, and was the first foreigner to study full time at the famous Sichuan Institute of Higher Cuisine.

She joins Melissa Block in the kitchen to prepare one of the most common Hunanese meals, said to have been a favorite of Chairman Mao: home-style bean curd, a spicy dish that creates a rich glow in the mouth.

The following recipes and commentary appear in Revolutionary Chinese Cookbook by Fuchsia Dunlop and are reprinted with permission of the publisher, W.W. Norton & Company, Inc. 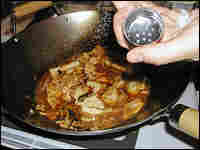 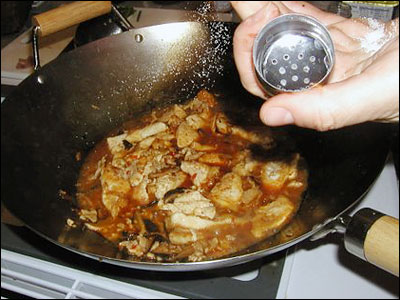 When I stay with my friend Fan Qun at her parents' farmhouse in northern Hunan, we sit outside on sunny days, looking out over the narrow fields and gently rising hills. The road is a track, and there is virtually no traffic, but neighbors walk past often, and usually stop for a chat or a cup of tea. One occasional visitor is the local bean curd-maker, an old man in a blue Mao suit, who carries a bamboo slat on his shoulders, from which hangs a basket of freshly made bean curd, and a basket of the bean curd dregs that can be made into soup. Fan Qun's mother sometimes fries the bean curd, and then simmers it in a sauce with chiles and other seasonings.

"Home-style bean curd" is one of the most common everyday dishes in Hunan, and is said to have been a particular favorite of Chairman Mao's. I have recorded many different versions of it, in kitchens all over Hunan, and the one below is my amalgamation of the most delicious. If you don't have either chili bean paste or the salted chiles, just use double quantities of the one you do have. To make it really rustic, you should use lard instead of oil for frying, and serve the sauce unthickened.

1. Put the dried mushrooms into a heatproof bowl, pour over enough hot water from the kettle to cover and leave to soak for 30 minutes. Drain, squeeze dry, discard the stalks, and cut the caps into thin slices; set aside.

2. Meanwhile, cut the bean curd into large squares, then cut these into triangular slices, about 1/2 inch thick; set aside. Put the pork in a bowl and mix with the Shaoxing wine.

3. Heat the wok over a high flame until smoke rises, then add 3 tablespoons of the peanut oil or lard and swirl around. Lay slices of bean curd onto the surface of the wok and fry, turning over once, until golden on both sides. Drain on paper towels and set aside. You will need to fry the bean curd in a couple of batches.

4. Clean the wok, if necessary, and reheat over a high flame until smoke rises. Add 3 tablespoons peanut oil or lard and swirl around. Add the pork and stir-fry until the slivers separate. Add the chili bean paste and salted chiles and stir-fry until fragrant. Throw in the mushrooms and garlic and continue stir-frying until they also smell delicious. Add the chili flakes, if using, stir once or twice and then pour into stock.

5. Return the bean curd to the wok with the dark soy sauce and bring to a boil. Reduce the heat and simmer for several minutes to allow the flavors to penetrate the bean curd, seasoning with salt to taste, if necessary.

6. Add the potato flour mixture and stir to thicken the sauce, then add the scallion greens. Finally, off the heat, stir in the sesame oil and serve.

Learn About the Origins of General Tso's Chicken

This version of the dish is based on one I learned in the kitchen of the Peng Yuan restaurant in Taipei. It was invented by veteran chef Peng Chang-kuei, who still runs the restaurant with his son, Peng T'ieh-cheng. The dish is hot and sour, and lacks the sweetness of the Americanised version, which follows. You can use chicken breast instead of thigh meat if you prefer.

1. Unfold the chicken thighs and lay them, skin side down, on a chopping board. (If some parts are very thick, lay your knife flat and slice them in half, parallel to the board). Use a sharp knife to make a few shallow criss-cross cuts into the meat — this will help the flavors to penetrate. Then cut each thigh into bite-size slices, an uneven 1/4 in or so in thickness. Place the chicken slices in a bowl.

2. To make the marinade, add the soy sauces and egg yolk to the chicken and mix well, then stir in the potato flour and lastly the oil; set aside while you prepare the other ingredients.

3. Combine the sauce ingredients in a small bowl; set aside. Use a pair of scissors to snip the dried chiles into 3/4-inch pieces, discarding seeds as far as possible.

4. Heat enough oil for deep-frying to 350-400 degrees. Add the chicken and deep-fry until it is crisp and golden. (If you are deep-frying in a wok with a relatively small volume of oil, fry the chicken in batches.) Remove the chicken with a slotted spoon and set aside. Pour the oil into a heatproof container, and clean the wok if necessary.

5. Return the wok to a high flame with 2-3 tablespoons of peanut oil. Add the dried chiles and stir-fry briefly until they are fragrant and just changing color (do not burn them). Toss in the ginger and garlic and stir-fry for a few seconds longer, until fragrant. Then add the sauce and stir as it thickens.

6. Return the chicken to the wok and stir vigorously to coat the pieces in sauce. Remove from the heat, stir in the sesame oil and then serve, sprinkled with scallion greens.

Red-braised pork is a dish that in Hunan is inseparably bound up with the memory of Chairman Mao: many restaurants call it "The Mao Family's red-braised pork." Mao Zedong loved it, and insisted his Hunanese chefs cook it for him in Beijing. It's a robust concoction, best eaten with plain steamed rice and simple stir-fried vegetables, but the sweet, aromatic chunks of meat are irresistible, and it's always a favorite at my London dinner parties.

In keeping with traditional Chinese gastronomy, which seeks to make a medical virtue out of every dietary predilection, the people of Mao's home village, Shaoshan, recommend red-braised pork as a health food: "Men eat it to build their brains," Chairman Mao's nephew Mao Anping assured me when I met him there a few years ago, "and ladies to make themselves more beautiful." His friend and neighbor, the Shaoshan communist party secretary, told me he ate two bowlfuls a day to keep his intellect in shape.

The one that uses water chestnuts is a particular favorite of mine. In Shaoshan, cooks traditionally leave the skin intact for maximum succulence, and cut the meat into rather large chunks, perhaps 1 1/2 inches long: I tend to make the pieces a little smaller. The recipe below takes its color from caramelized sugar, which gives it a lovely reddish gloss, but many people just use dark soy sauce at home.

3/4 in. piece fresh ginger, skin left on and sliced

1. Plunge the pork belly into a pan of boiling water and simmer for 3-4 minutes until partially cooked. Remove and, when cool enough to handle, cut into bite-sized chunks.

2. Heat the oil and white sugar in a wok over a gentle flame until the sugar melts, then raise the heat and stir until the melted sugar turns a rich caramel brown. Add the pork and splash in the Shaoxing wine.

3. Add enough water to just cover the pork, along with the ginger, star anise, chiles, and cassia. Bring to the boil, then turn down the heat and simmer for 40-50 minutes.

4. Toward the end of the cooking time, turn up the heat to reduce the sauce, and season with soy sauce, salt, and a little sugar to taste. Add the scallion greens just before serving.