Accessibility links
Death by Excited Delirium: Diagnosis or Coverup? A growing number of people in police custody are dying of a controversial diagnosis termed "excited delirium." Doctors believe the condition exists, and medical examiners nationwide recognize excited delirium as a cause of death. But civil-rights groups are furious, calling it a made-up phrase meant to absolve police of abuse. 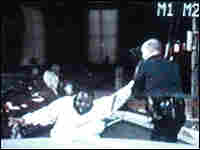 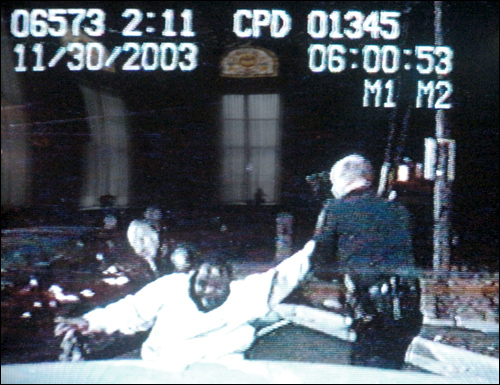 You may not have heard of it, but police departments and medical examiners are using a new term to explain why some people suddenly die in police custody. It's a controversial diagnosis called excited delirium. But the question for many civil liberties groups is, does it really exist?

The phenomenon can be witnessed in a grainy video shot in 2003 by a dashboard camera in a Cincinnati police car. In it, a patrol car pulls up quickly to the parking lot of a White Castle in Cincinnati. A 350-pound man is seen stumbling around, yelling.

The man is 41-year-old Nathaniel Jones, a father of two who worked in a group home. He argues with two officers. He seems confused; he can't keep his balance. The officers close in. The officers order Jones to get down but they can't seem to catch him. He throws his body at one of the officers. Out come the nightsticks.

They strike him about 40 times. Jones is on the ground when more officers arrive with nightsticks. Jones calls out for his mother. That's the last thing he says.

The coroner found that Jones did not die from excessive police force but from a number of causes — such as heart failure, obesity, drug use and asphyxiation. He later told reporters that Jones' death could have been the result of something called excited delirium.

Deborah Mash, a professor of neurology at the University of Miami, describes the symptoms of the condition:

"Someone who's disproportionately large, extremely agitated, threatening violence, talking incoherently, tearing off clothes, and it takes four or five officers to get the attention of that individual and bring him out of harm's way — that's excited delirium."

Mash says the phenomenon came to light in the 1980s, when cocaine burst onto the scene. Most victims have cocaine or drugs in their systems. Jones had smoked cocaine and PCP. Mash says victims become irrational, their body temperatures rise so fast their organs fail, and then they suddenly die.

"It's definitely real," Mash says. "And while we don't know precisely what causes this, we do know it is the result of a neural chemical imbalance in the brain."

But nearly all reported cases of excited delirium involve people who are fighting with police. And that's extremely problematic, says Eric Balaban of the American Civil Liberties Union.

He's right. Excited delirium is not recognized by professional medical associations, and you won't find it listed in the chief psychiatric reference book.

Balaban charges that police officials are using the diagnosis "as a means of white-washing what may be excessive use of force and inappropriate use of control techniques by officers during an arrest."

The International Association of Chiefs of Police hasn't accepted the diagnosis, either, saying not enough information is known. But every year, excited delirium is showing up on more and more medical examiners' autopsy reports.

An Overdose of Adrenaline?

According to Dr. Vincent Di Maio, "What these people are dying of is an overdose of adrenaline."

Di Maio was until recently the chief medical examiner for Bexar County, Texas. Di Maio says that he saw three to five cases of excited delirium each year, and that there are probably several hundred cases nationwide.

He says the condition typically arises after officers have wrestled down an uncooperative suspect:

"They bind the feet, and every one stands back and they're panting. And then finally someone says, 'He's not breathing.'"

Di Maio says it is often the very act of resisting that sends people prone to excited delirium over the edge. If they were in a field, alone, running around hysterical, Di Maio says they might still have died. But he says fighting makes death all but certain. And because most people are in public places, not in fields, that means they're usually fighting with the police. Di Maio says civil liberties groups then wrongly blame the officers for the death.

"They buy into this mode that if somebody dies, somebody's got to be responsible," DiMaio says. "Of course, it can't be the person high on coke or meth."

But even with an extensive autopsy, there is no definitive way to prove someone died of excited delirium.

"But if you're talking about police abuse — beating him to death, or hog-tying — the answer is yeah, you can tell the difference," Di Maio says.

Either way, it doesn't matter, says Dawn Edwards of the Ella Baker Center, a police watchdog group in Oakland, Calif. If police take a person into custody, Edwards argues, they need to make sure the person stays alive — whatever the condition of the person's brain or body temperature or their agitated state.

"They want the victim to be looked at as the cause of his or her own death," she says. "The bottom line is that these people are dying at the hands of, or in the custody of, police officers."

Diagnosis Based on Behavior Alone

Several medical doctors interviewed by NPR said there is a way to calm someone down who has the symptoms that have come to be known as excited delirium. Doctors at the emergency room at the Vanderbilt University hospital in Nashville, Tenn., have tranquilized three people. Their heart rates and body temperatures were soaring. They woke up fine.

But that was in a hospital, with doctors and intravenous drugs. Police officers are not allowed to administer medicine. They have only their nightsticks, Tasers, pepper spray or their own bodies — which may make the situation worse.

Because excited delirium doesn't show up in an autopsy, it is the subject's behavior that determines the diagnosis. And if there aren't any witnesses, only the police can describe what happened.

Videos of excited delirium incidents are rare. And as officers made clear at the end of the tape of Nathaniel Jones' death, police are not always eager to have the cameras on.

In that video, as an ambulance crew straps Jones to a gurney, the officers standing in front of the patrol car ask whether anyone left their onboard video recording devices on.

"I know it's on. I left it on. I turned the mike off," an officer is heard saying.

The officer swears and rushes to his car. He shuts the video off and the tape goes dead. But even with a video, a medical examiner, a dozen witnesses and an autopsy, exactly how and why Nathaniel Jones died still seems to depend on whom you ask.