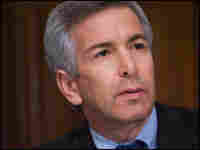 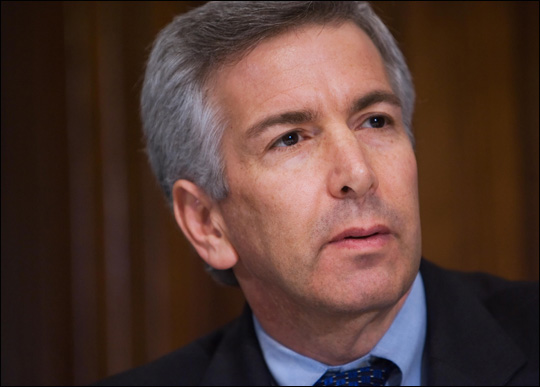 Fred Krupp, president of Environmental Defense, at a news conference organized by the U.S. Climate Action Partnership on Jan. 22, 2007 at the National Press Club in Washington, D.C.

Environmental advocacy groups were called in to help structure the deal for TXU Corp., the Texas electrical utility. Fred Krupp, president of Environmental Defense, speaks with Steve Inskeep about the process of winning environmental commitments from TXU's suitors.

What was it that you were pressing TXU to do, or not to do?

We were unhappy, initially, that they had suggested building 11 new [coal power] plants, which would have put 78 million tons of additional carbon dioxide into the atmosphere. That is a tremendous amount of carbon pollution.

Yes. We had taken [out] a federal lawsuit. We also had an aggressive advertising campaign. We were doing everything we could to make the case.

Did all of that protest and activity give you some leverage when it came time to sell the company?

What I can tell you is, a little over a week ago I got a call from Bill Reilly, an old friend, who said that Texas Pacific Group and KKR (Kohlberg Kravis Roberts & Co., a private equity firm that specializes in buying and selling companies) were interested in purchasing TXU, but would only go forward if they could recreate the company as a "green" power generator.

This is a former head of the Environmental Protection Agency who calls you up, and he's helping to broker the deal?

What did you demand of them?

We had a series of discussions that started, actually, one day at 8 a.m. and went through 1 a.m. the next morning. We very much wanted to reduce the number of power units they were planning, to get that 11 number down substantially. And Bill Reilly, from the first phone call, was offering to withdraw eight of the proposed applications.

And one of the biggest things that we did get is a commitment to reduce their carbon emissions back to 1990 levels by 2020.

That's what's called for under the Kyoto Agreement that the United States didn't sign.

Yes. So the idea that a Texas utility is going to roll back any increase in carbon pollution from building new power plants, I think it clearly means that the world is changing and there is an awareness that we're moving into a carbon-constrained world.

Did the question cross your mind about whether you were being co-opted or bought off in any way?

Any time we deal with any company, we want to make sure that we are getting a substantial good result for the environment. We think this is a watershed and that this will help us get to the day where the nation enacts a cap on carbon pollution. Because, as good as this is, we do need a law that puts a legal limit in place.

What did you have to give up in order to gain the results that you did?

We agreed to drop, or to settle, I should say, a federal lawsuit. We also agreed to be positive about this transaction, which is easy for us to do given its environmental features. And, finally, we agreed to introduce our new friends at the Texas Pacific Group and KKR to our old friends at Public Citizen and in Robertson County who are litigating the construction of two units that the new company is going to want to continue to construct.

I assume that TXU was planning 11 new power plants because they made a decision that the demand was there and that people needed more power generation. How are they going to get the power?

This is becoming a new model, where utilities are understanding that they can make money by helping customers save energy.

Are those steps enough to roll back the amount of greenhouse gas emissions, just more efficiency and more wind power?

I think they're going to go a long way. There will be other steps as well the company needs to take. And we'll be working with them on an advisory board.

At a Glance: The TXU Deal

Read more about the debate over TXU's and other Texas utility companies' plans to build coal-fired power plants in the state.

Dallas-based TXU has agreed to be acquired by an investment group led by private-equity firms Texas Pacific Group and Kohlberg Kravis Roberts.

Some news sources say the deal is valued at $45 billion, others say $32 billion. The higher value includes the amount of TXU debt that the buyers would take on. Subtract the debt and you arrive at a still-significant $32 billion payment, making the TXU deal the largest-ever private-equity deal — even with the debt excluded.

The investors will pay TXU shareholders $69.25 a share. That's a 15 percent premium to TXU's closing price on Friday.

In order to win regulatory approval, TXU's new ownership has promised to scrap eight of the 11 coal-fired electric power plants that the utility had planned to build. The private-equity firms worked with the Environmental Defense Fund and the Natural Resources Defense Council in order to gain their endorsements.

The cancellation of eight coal-fired power plants will prevent additional annual carbon emissions of 56 million tons, according to TXU's statement.

The new owners have promised to cut electricity rates by 10 percent. That adds up to $300 million of annual savings for residential consumers, according to a statement on TXU's Web site. This "price protection," as the company calls it, is good only through September 2008.

The proposed buyout still has to be approved by state regulatory officials and by TXU shareholders. Either one could prevent the deal from happening.

TXU will have 50 days to see rival bids. A bidding war could develop as other private-equity firms eye the opportunity.