Accessibility links
Longfellow Fans Seek to Make the Weather Verse In honor of Henry Wadsworth Longfellow's birth — 200 years ago Tuesday — the Longfellow Bicentennial Committee invites broadcasters to use lines from his poems in weather reports. For instance: "Silent and soft and slow descends the snow." 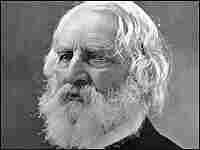 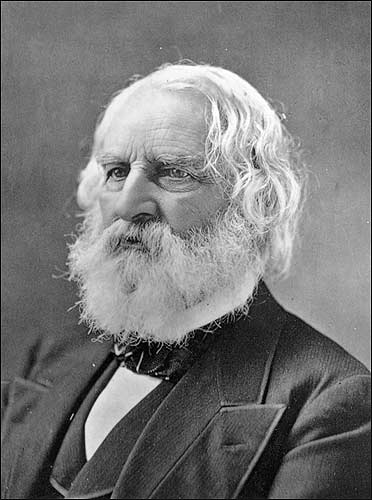 Henry Wadsworth Longfellow (1807 -1882), the American poet whose most popular work was 'Hiawatha'.

The American poet who gave us Paul Revere's Ride and Hiawatha was born 200 years ago Tuesday. Fans of Henry Wadsworth Longfellow are marking his birthday with readings, concerts, and "The Longfellow Poetry Forecast."

Silent and soft and slow/descends the snow.

Marian Carlson, co-chair of the Longfellow Bicentennial Committee, and her cohorts recently e-mailed 1,800 meteorologists across the country the above couplet and others like it. She hopes radio and TV weather reporters will incorporate his verse into their forecasts to honor Longfellow's birthday.

"Maybe he wasn't writing a forecast, but he used this wonderful imagery as a segue into his state of thought," says Carlson. "It often matched the state of the weather."

The day is cold and dark and dreary/It rains and the wind is never weary.

That line resonated with Greg Shoup, a TV weather man in Indiana.

"We had freezing rain, sleet, snow — kind of what they call a wintery mix. Weather people, myself included, are very verbose," Shoup says. "We aren't precise like this is so it's kind of neat that he can fit in two lines what everybody feels about the day."

Accuweather meteorologist Elliot Abrams, heard on commercial radio in more than a dozen major markets, says this line was appropriate for Kansas City:

Oh perfect day/Whereon shall no man work, but play/Whereon it is enough for me/Not to be doing, but to be.

And in Boston, Abrams said, this one seems to work:

During a visit to Longfellow's home in Cambridge, Mass., Poetry Forecast organizer Carlson says the wet snow reminds her of one of his most famous quotes:

Into each life some rain must fall/Some days must be dark and dreary.

"He's telling his heart to be still, and wait, and have hope," says Carlson. And that, she says, is Longfellow's timeless message.