Accessibility links
Tasers Implicated in Excited Delirium Deaths Excited delirium is a controversial diagnosis increasingly used by medical examiners to explain why people die suddenly in police custody. Taser International has used the diagnosis successfully to defend itself in wrongful-death cases in which its stun guns were also used.

This is the second of two reports on excited delirium. 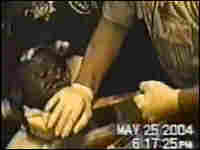 A still from a video shot by police shows efforts to revive Frederick Williams at the Gwinnett County Detention Center in a suburb of Atlanta in May 2004. Williams stopped breathing shortly after being stunned with a Taser; he died a few hours later. His family is suing the county and Taser International; the company has made it clear that it plans to argue Williams died of excited delirium. Google Video hide caption 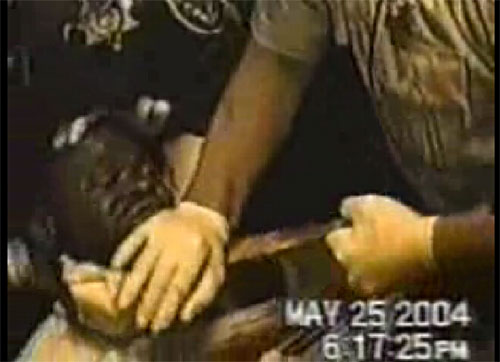 A still from a video shot by police shows efforts to revive Frederick Williams at the Gwinnett County Detention Center in a suburb of Atlanta in May 2004. Williams stopped breathing shortly after being stunned with a Taser; he died a few hours later. His family is suing the county and Taser International; the company has made it clear that it plans to argue Williams died of excited delirium.

Below are some recent instances in which excited delirium was cited to explain the deaths of people in police custody. In each case, the deceased had also been stunned with a Taser:

The medical diagnosis called excited delirium is the subject of intense debate among doctors, law-enforcement officers and civil libertarians. They don't even all agree on whether the condition exists. But to Senior Cpl. Herb Cotner of the Dallas Police Department, there's no question that it's real.

"This is when you have someone doing push-ups with two 150-pound officers on their back," Cotner says, describing how the condition can manifest itself.

Excited delirium is a term more medical examiners are using to explain why people — often high on drugs or alcohol — die suddenly while in police custody. Symptoms are said to include extreme agitation, aggressive, violent behavior and incoherence.

Cotner had to subdue several men. One man smashed through a plate-glass window, fell from a fence, broke his leg several times and still walked two blocks to fight with police.

"[I] had a guy that was handicapped, with a bad leg and a bad arm," Cotner said about another man. '[He] dragged us across a parking lot, and we had him half-controlled."

"These fights leave us exhausted," he adds. "There is no one thing that simply describes this. It's a totality of characteristics that you can't explain."

One minute, a person is fighting and screaming; the next minute, he's dead, Cotner says.

Cotner trains officers to give the person space and try to calm them — unless the person poses a danger to someone else. In those cases, a fight often results.

And in a growing number of cases, police officers end up reaching for their Tasers. That is where the debate over excited delirium becomes more complicated.

Civil-liberties groups fear that the diagnosis is being used to cover up police abuse — and to protect companies like Taser International from lawsuits.

Taser International, the company that makes stun guns, says its product helps police deal with people suspected of having excited delirium. A company spokesman told NPR that Tasers could be the only way to subdue a person fast enough to get medical attention.

But according to civil-liberties groups and legal filings, Taser may have financial reasons to support — and even encourage — the use of the excited delirium diagnosis.

Take the case of Frederick Williams. On a grainy video, Williams is screaming, 'Don't kill me! I have a family to support. I've calmed down!" as several officers carry him into the Gwinnett County Detention Center in a suburb of Atlanta. One officer takes out his Taser and fires it directly onto Williams' chest.

Williams' family is now suing the county and Taser International. The company has made it clear in proceedings so far that it intends to argue Williams died of excited delirium — not because of the Taser or excessive force. The medical examiner could not determine the exact cause of death.

Williams, a deacon in his church and father of four, had no drugs or alcohol in his system.

Excited delirium has helped Taser International in the past. In recent years, the company has successfully defended itself against at least eight lawsuits involving people who died in police custody, arguing that the cause of death was excited delirium, not the Taser.

Taser International spokesman Steve Tuttle acknowledges that each year, his company sends hundreds of pamphlets to medical examiners explaining how to detect excited delirium. Taser also holds seminars across the country, which hundreds of law-enforcement officials attend. But Tuttle says his company is only providing information that has been vetted by researchers.

"We're not telling departments [that] excited delirium is always the cause of death following a Taser application," Tuttle said. "We're simply pointing out the facts: that excited delirium is an issue out there, and they need to treat this as a medical emergency if they see these signs."

Taser is also reaching out to the medical community.

John Peters is president of the Institute for the Prevention of In-Custody Deaths, a prominent consulting company in Henderson, Nev. His firm specializes in training law-enforcement officers, coroners, emergency-room physicians and others in the medical community about sudden death from excited delirium.

A Conflict of Interest?

Peters is also one of Taser International's star witnesses against claims that the weapon kills people. He and his staff were paid by Taser for a year and a half to instruct at the company's training academy.

Peters says that training law enforcement to embrace excited delirium does not affect his impartiality on the stand.

"Some people would say, 'Well, obviously you're on their side,'" Peters said. "But the Taser is just one piece of this. I'm not a Taser instructor. I don't hold stock in Taser. So we try to maintain a distance or separation."

But Eric Balaban, a staff attorney with the American Civil Liberties Union, worries that the messages police receive about excited delirium may actually exacerbate confrontations with people in custody.

"If police officers are being trained about this condition known as excited delirium, and are being told the people suffering from it have superhuman strength, and [these people] are being treated as if they are somehow not human, it can lead officers to escalate situations," he said.

Balaban says the fear is not just that excited delirium may not exist, but that it is already being overused — in lawsuits and on the streets.