Accessibility links
'Low and Behold': A Post-Disaster New Orleans The independent feature film Low and Behold is a portrait of New Orleans after a Katrina-like disaster. The movie debuted at the Sundance Film Festival last month.

The independent feature film Low and Behold is a portrait of New Orleans after a Katrina-like disaster. The movie debuted at the Sundance Film Festival last month. 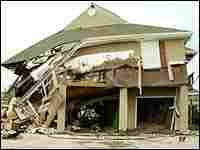 This is DAY TO DAY. And do you ever wonder why there's not a CSI Boston? I'm Luke Burbank.

I'm Alex Chadwick. Maybe because the CSI labs always get it right, and in real-life Boston, there's a DNA lab where things do not go right all the time. That story, coming up.

BURBANK: First though, to the Gulf Coast, where filmmakers have been zooming in since Katrina and Rita. Well now two Louisiana moviemakers have completed the first work of fiction inspired by the storms, a feature film about the new New Orleans. It's called "Low and Behold", and Molly Peterson takes a look.

MOLLY PETERSON: The word Katrina isn't in "Low and Behold". It unfolds after an unnamed catastrophe and follows Turner Stull, a young insurance adjuster newly hired. Early on, he's at a party, sweaty people, everyone in matching polo shirts, all in Louisiana to make money. He sips beer from a plastic cup and tries to understand as his new boss speaks.

Unidentified Man #1: I used to lay in bed at night and pray to God that he would bring a natural disaster on this country, a disaster so large as to bring massive property damage.

Unidentified Man #1: No one would get hurt or die.

Unidentified Man #3: Of course not, you know.

Unidentified Man #1: But it would yield the largest claims the industry had ever seen.

PETERSON: Turner is stupefied. So are we. The character's played by Barlow Jacobs, the film's co-writer. Living in uptown New Orleans, Jacobs saw Katrina damage firsthand - his place was crushed by a tree. He also heard that speech in real life. Without a home after the storm but inspired to make a movie about it, he took a gig for research as a claims adjuster in Florida. The job surprised him.

PETERSON: "Low and Behold" finds comedy in the job's real awkwardness. Turner Stull quickly and literally gets in over his head - trapped on a roof, asking someone for help he's there to provide.

Mr. JACOBS: (As Turner Stull) Can you just - can you get my ladder? It fell.

Unidentified Man #4: Well, you know, I don't know, man. See there's this guy who once told me it's not good to help strangers.

PETERSON: But true life is also heartbreaking. The character is later confronted by a homeowner, channeling powerless rage so many Louisianans know.

Mr. JACOBS: (As Turner Stull) We have to do things my way. I can't let…

Unidentified Man #5: Your way? I mean, we're going to do things your way?

Unidentified Man #5: I am not going to let you do this to me.

Mr. JACOBS: (As Turner Stull) Hold up. Hold up.

PETERSON: Local cast and crewmembers lost homes and family to the storm, Jacobs says. Their pain deepens their work. So, too, the film's imagery. Characters move through ruined neighborhoods, and reconstruction is noisy. Generators hammering. A bulldozer tears through someone's brick house.

PETERSON: They filmed 10 months after Katrina. Co-writer and director Zack Godshall says the filmmaker's sense of urgency led them to work fast.

Mr. ZACK GODSHALL (Co-writer and Director, "Low and Behold"): We kind of would film a scene off the cuff like that, or kind of shoot some scenery as we found it ourselves and mixing - wanting to make documentary about this and then how we respond to these locations. You see this stuff, and you say, man, other people should see this, too.

PETERSON: Godshall is from Lafayette, near coastal areas still hurting. He says his feeling for home, for the whole state's trauma, may have seeped in to his camera.

Mr. GODSHALL: Everything you see has been a part of someone's life. And that's just what we felt. I don't know if it was really a conscious effort. It was more just like we're trying to be as honest as we possibly can.

PETERSON: Documentary-style interviews are scattered through "Low and Behold" - footage of residents caught on the fly, including down in St. Bernard, a man named Emmanuel Alfonso. Alfonso says when the filmmakers approached him -Godshall with the camera rolling, Jacobs in character as Turner Stull - at first he thought he was talking to a real insurance guy.

Mr. ALFONSO: I haven't gotten paid by my insurance yet.

PETERSON: Alfonso is still waiting on his check. Godshall and Jacobs say they hope to encourage compassion for Louisianans. In the film and in life, that can happen even just when people see each other.

PETERSON: Emmanuel Alfonso says he's hopeful for that, too. Devastation tours do roll through St. Bernard. They don't often stop.

Mr. ALFONSO: They got tourists sometime on a weekend. They'll get a big tour buses come, and I know that. Because people need to see us. They really need that.

PETERSON: More people will see them. There's no distribution deal yet, but good reviews in Sundance have given the film a boost, and "Low and Behold" will continue to make the festival rounds this year.