Accessibility links
Fort Dix Holds Jobs Fair for Wounded Soldiers The Pentagon is inviting soldiers wounded in Iraq to job fairs around the country where they can look for employers who will accommodate their disabilities. It's part of a program called Hiring Heroes. 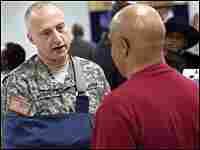 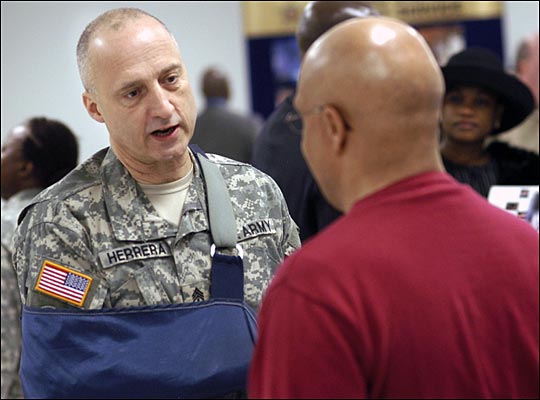 For soldiers injured in Iraq, the road back to recovery isn't just physical. Many are looking for ways to return to civilian life with jobs that can accommodate disabilities. As part of a new program, the Pentagon is holding special career training and job fairs for sick and injured soldiers.

For the 200 or so soldiers at the Hiring Heroes career fair at Fort Dix, N.J., the very act of walking into an interview is a physical challenge. All have been injured either in training or in Iraq. They walk on crutches and have body braces.

This is the eighth job fair the Pentagon has sponsored specifically for injured soldiers. Karen Hannah, the program manager, says that they've had 70 confirmed job offers from the events. It may not seem like much, she says, but much of the point of the program is to build confidence in the candidates.

The military specifically brings in companies and public sector organizations that already have disability recruitment programs and that seek out military personnel. For the soldiers, it's a job fair where they aren't up against recent college graduates in three-piece suits. Everyone is wearing fatigues and many are wearing casts and carrying crutches.

Most of the organizations that come to the military job fairs are other government organizations such as the CIA and the Department of Homeland Security or military services companies. IBM and COMCAST attended the Fort Dix fair. Telephone-survey companies and police departments also take part in the fairs to find future employees.