Accessibility links
Concert Violinist Plays Indie-Rock Gigs Concert violinist Hilary Hahn has been making a splash on the classical music circuit since her debut at age 16. But when she's not appearing as a soloist at Carnegie Hall, Hahn plays at rock clubs and record stores. 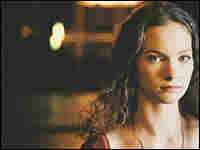 Grammy Award-winning violinist Hilary Hahn plays around 80 concerts a year with orchestras from all over the world. She also enjoys playing at rock clubs and record stores in her spare time. Mathias Bothor/Deutsche Grammophon hide caption

'Fork in the Road'

'The Blue Part of the Windshield'

Hilary Hahn plays with the Swedish Radio Symphony Orchestra on her latest recording:

Hahn and Trail of Dead

Hahn's recording with Texas band And You Will Know Us By the Trail of Dead:

'To Russia My Homeland'

Violinist Hilary Hahn is just as comfortable performing in a strapless gown at Carnegie Hall as she is wearing jeans at a rock club.

The 27-year-old has been sought after on the classical music circuit since she made her first recording more than 10 years ago.

Lately, Hahn is finding time to record with a handful of indie-rock artists. She recorded a song with an up-and-coming Texas band with a mouthful of a name: And You Will Know Us By the Trail of Dead. And Hahn recently played alongside singer-songwriter Tom Brosseau at Seattle's Tractor Tavern.

The Grammy Award-winning violinist is featured on Brosseau's new album, Grand Forks, which deals with the flooding of his hometown in North Dakota.

Hahn says her rock career started by accident when she volunteered to play with a family friend. She liked performing in smaller venues and felt connected to the audience.

Playing rock gigs, Hahn says, has taught her to become more comfortable with improvisation and given her a new appreciation for her own musical process.

"I really admired the music that I was playing in a way that I hadn't before," she says.