Accessibility links
Russian Foreign Policy Hints at a New Cold War Fifteen years after the collapse of the Soviet Union, the rhetoric from Moscow is once again confrontational. Some observers warn of a new Cold War and say the U.S. and Europe need to reassess their attitudes toward Russia.

The first report in a five-part series. 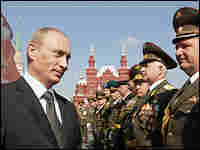 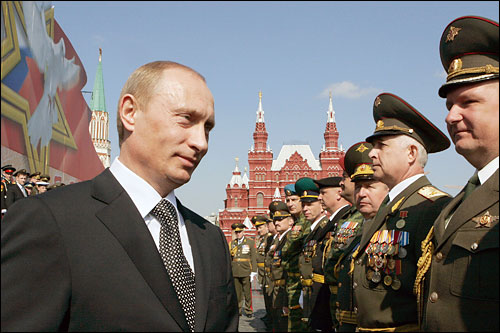 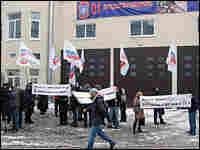 Members of a pro-Kremlin youth group protest outside the Estonian Embassy in Moscow.

Booming sales of oil and gas are driving Russia's economy to new levels, and Moscow is eager to prove that its humiliating years of post-communist uncertainty are over. Read an overview of the series.

During the Cold War, military parades on Red Square were part of a massive show of force. The practice stopped during the 1990s, but now it has been revived.

Russia is back. Fifteen years after the collapse of what Washington used to call the "evil empire," the rhetoric from Moscow is once again confrontational, and often directed against the West.

Some observers have warned of a new Cold War and say the United States and Europe need to reassess their attitudes toward Russia.

But Russia is plotting a different course than the Soviet Union, which projected power through military might and communist ideology.

"Oil and gas generate 70 percent of the country's income," Ryzhkov says. "That means the interests of the state Gazprom natural gas monopoly are often inextricably linked to foreign policy."

The boom is changing the face of Moscow by driving the construction of imposing new office buildings. Sales from Russia's vast reserves of oil and gas are powering the economy to levels not seen since its dramatic post-communist collapse.

But business success is also changing foreign policy. Officials have made no secret of their belief that Russia's economic recovery entitles it to flex political muscle in the international arena.

Western governments say Russia is using energy to bully its rivals. But the Kremlin's actions are popular back home.

"If we continue on the same path, in 20 years, God willing, we'll be able to resurrect the might of our great predecessor, the Soviet Union," Boycko says.

In the corridors of power, anger at the West is growing. Officials are particularly offended by Western criticism of human rights violations, which is seen here as merely a political tool with which to pressure Russia.

Boris Nemtsov, a top pro-Western reformer in the 1990s, says that's because Putin and his allies think other countries are run just like Russia, and that in a powerful country such as the United States, the government must have control of the judicial system and the media.

"No independent court system, no opposition, no independence of press," Nemtsov says. "This is all a special cynical game against Russia. [Putin] believes in that."

The U.S. plans to install part of its controversial missile defense system in Poland and the Czech Republic — former Soviet Bloc countries that are now NATO members. The plans have further angered the Kremlin, and Moscow has warned that it may target any such sites in Eastern Europe with its own missiles.

Russia's new aggressiveness was also starkly evident in February at a defense and security conference in Munich. President Vladimir Putin lashed out against Washington, helping to plunge relations between the United States and Russia to their lowest level since the Cold War.

"One state's rule has overstepped its national borders in all areas, in economics, politics and the humanitarian sphere, and is trying to force itself on other states," Putin told the conference in a pointed jab at the United States. "Well, who would like that?"

Russian media headlines proclaimed the start of a new Cold War. But experts dismiss such rhetoric. Despite its revival, Russia's economy is still relatively small — it is the world's ninth largest, lagging behind Italy — for it to compete as an equal to most Western countries.

But Moscow's new clout does mean its cooperation is crucial not only on energy, but also on issues such as nuclear nonproliferation and anti-terrorism.

That kind of collaboration is increasingly rare. Sarah Mendelson of Washington's Center for Strategic and International Studies says Moscow has reverted to Soviet-style obstructionism in international forums, such as the United Nations Security Council, where Russia has veto power.

"Time and time and time again, the Russians are voting with the Chinese on a variety of issues," Mendelson says. "They often have to do with human rights, and it's simply meant to put a spoke in the wheel as the international community is trying to do something about gross human-rights violations. And that is very much a legacy of the Soviet Union, and it's very disturbing."

Critics in Washington say Russia has opposed U.S.-led efforts to block the nuclear programs in North Korea and Iran. Moscow is building a nuclear power plant in Iran and also recently sold Tehran a billion dollars' worth of tactical missiles, much to Washington's annoyance.

Western leaders say Putin's recent harsh criticism of the West was a wake-up call about the country's direction in foreign policy. But many analysts say it's time the United States and its European allies develop a common approach to Moscow if they want to deal effectively with the new gauntlet the Kremlin has thrown on the world stage.