Accessibility links
Walter Reed Scandal Unfolds with General's Firing Questions are being raised about the new commander in charge of the Army's Walter Reed Army Medical Center, a day after the previous general in charge was fired. 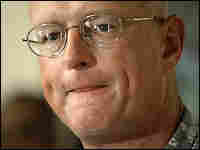 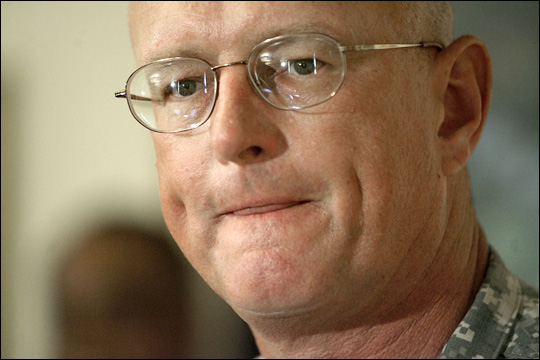 Lt. Gen. Kevin C. Kiley, M.D., surgeon general of the Army, holds a news conference after leading members of the news media on tours of outpatient housing at Walter Reed Army Medical Center on Feb. 22, 2007 in Washington, DC. Lt. Gen. Kiley has since been named the interim head of Walter Reed.

Questions are being raised about the new commander in charge of the Army's Walter Reed Army Medical Center, a day after the previous general in charge was fired.

The shuffle at Walter Reed takes place two weeks after a series of articles in The Washington Post exposed troubling conditions at the Washington, D.C., facility.

The paper described a medical bureaucracy that left hundreds of wounded Iraqi vets wading through mountains of paperwork as they tried to obtain medical care. The Post also reported on the poor condition of rooms used by some veterans receiving treatment at the hospital.

On Thursday, the Pentagon responded by firing Maj. Gen. George Weightman, the hospital's director. Army spokesman Paul Boyce said that there will now be an overhaul in the way Walter Reed deals with outpatients.

"As we find things that need to have corrective action, we will take those steps immediately," Boyce said.

To begin the process, the Army named Lt. Gen. Kevin C. Kiley to serve as the interim head of Walter Reed. Lt. Gen. Kiley is the top Army medical officer.

But several former Army officials who have worked at Walter Reed — which Lt. Gen. Kiley ran in a previous stint that ended in 2004 — say he has known about the problems at the hospital since 2003.

And even last week, as the Pentagon promised swift action, Lt. Gen. Kiley was publicly blasting The Washington Post for what he called "one-sided reporting."

So the decision to have Lt. Gen. Kiley lead Walter Reed in the interim has left some senior pentagon officials fuming. One said, in private, "they fired the wrong guy and promoted the wrong guy."

In an interview Thursday night, Sen. Hillary Clinton (D-NY) — who serves on the Senate Armed Services Committee — said she'd look into the problems the Army is having at the medical facility.

"It's extremely troubling that senior officials at Walter Reed now, and in the past, appear to have known about the poor treatment, the lack of support [and] the substandard living conditions," Clinton said. "And that bothers me greatly."

Defense Secretary Robert Gates has already appointed an eight-member team to review procedures at Walter Reed. The committee will release its findings within 45 days.

But that report will not be released before the Senate Armed Services Committee holds its own investigation, scheduled for next week.

"We want to know who knew what, when and how could this have happened," Clinton said.

According to top Pentagon officials following this story, it's not over yet.