Accessibility links
N.Y. Plays from Monologists Eric Bogosian and Spalding Gray became well-known for their one-man shows in the 1980s and 1990s. Two shows opening in New York this week aim to prove that the work of these idiosyncratic authors can be taken on by other actors. 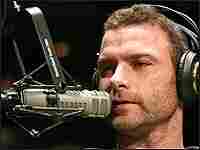 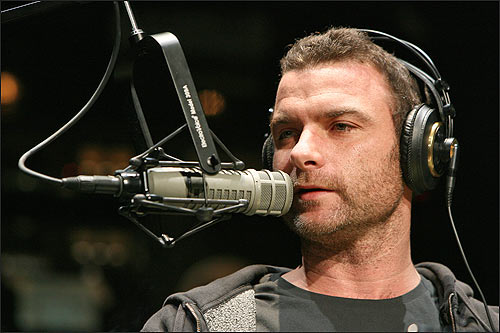 Reflections on the Two Plays

Bogosian on Creating a Collection of Characters for 'Talk Radio'

Kathleen Chalfant Reflects on Love and Lust in Gray's Work 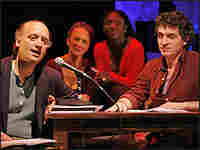 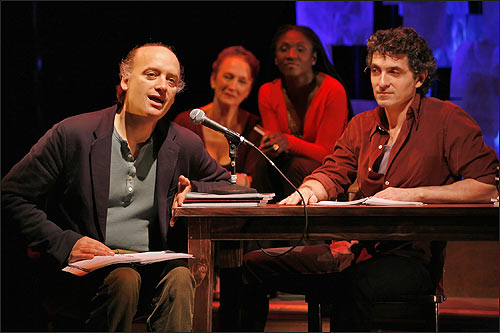 From 'Swimming to Cambodia'

Eric Bogosian and Spalding Gray became well known for their one-man shows in the 1980s and 1990s. Two shows opening in New York this week aim to prove that the work of these idiosyncratic authors can be taken on by other actors.

Bogosian's monologues were an acting tour de force: He would portray a gallery of characters centered around a single theme. In Talk Radio, Bogosian became Barry Champlain, an acerbic — and at times, vicious — radio host who takes calls from a menagerie of lonely hearts and crackpots. The show, which became an immediate hit when it opened at the Public Theater in 1987, is now a Broadway play.

Spalding Gray, who took his own life in 2004, wrote and performed pieces that were deep explorations of his own psyche. Five actors perform a collage of his monologues and journal entries in a new off-Broadway show Spalding Gray: Stories Left to Tell.

Bogosian found inspiration in Gray, who took aspects of his own life and turned them into art.

"I loved watching what he did," Bogosian says. "Anybody who thought they could simply follow in his footsteps discovered what incredible craft he brought to what he did."

In turn, Gray's widow Kathie Russo says the idea for the show came about when she arranged a reading of excerpts from the monologue Swimming to Cambodia – featuring Bogosian – a few years ago.

"It's like this light bulb went off," Russo says. "I go, 'Other people can read his work. No problem.'"

In the new play, Ain Gordon reads Gray's journal entries from behind a desk, with a glass of water — just as Gray did. Gordon says he isn't trying to impersonate him. "None of us are," says Gordon, who is better known as a playwright. "It's not possible."

One journal entry that Gordon delivers is Gray's last. The playwright had been in a terrible car accident and suffered brain damage.

This is my last entry. Kathie, it's an old story you've heard over and over. My life is coming to an end. Everything's in my head now, my timing's off, all this terrific hesitancy. In the last two years, I've had ten therapists, maybe more. Not to mention three psychopharmacologists and all those shock treatments. Suicide is a viable alternative for me, instead of going to an institution. I don't want an audience. I don't want anyone to see me slip into the water.