Accessibility links
Douglass Memorial Sparks Debate on Art vs. History Did slaves use secretly coded quilt patterns to help plan their escapes on the Underground Railroad? Many historians have their doubts. The design for a new Frederick Douglass memorial sparks a debate pitting oral tradition against documented historical fact. 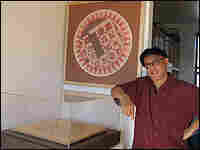 Algernon Miller stands with his model for the Frederick Douglass memorial. The design, which features quilt patterns that may have been used as codes by slaves on the Underground Railroad, has sparked controversy among artists and historians. Margot Adler, NPR hide caption 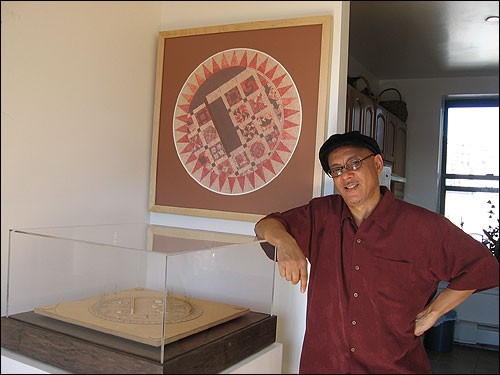 Algernon Miller stands with his model for the Frederick Douglass memorial. The design, which features quilt patterns that may have been used as codes by slaves on the Underground Railroad, has sparked controversy among artists and historians.

The design for a new Frederick Douglass memorial in New York has sparked a controversy that pits artistic truth and oral traditions against documented historical fact.

The memorial incorporates quilt patterns that slaves may have used on the Underground Railroad to help one another escape. Yet some historians say there is no factual evidence that these secret quilt codes were used. They argue that the memorial should not draw from factually unsupported claims.

The competition to design the Frederick Douglass memorial was won by Gabriel Koren and Algernon Miller in 2003. Koren's eight-foot bronze statue of Douglass will stand in a plaza of quilt patterns in granite designed by Miller.

Miller found himself inspired by the book Hidden in Plain View, by Jacqueline Tobin, a journalist and teacher, and Raymond Dobard, an expert on quilts.

Because quilts had long been a part of African-American art, Miller found them appropriate for the Frederick Douglass Memorial.

"In reading this story, there was the star quilt," says Miller, "and [Douglass'] newspaper was called The North Star. And I said, 'That's it.'"

Tobin's and Dobard's book, based on an oral family story, contends that quilts were used as secret codes for slaves escaping on the Underground Railroad. But many historians say there is no basis for this claim.

Tobin says she first learned of the quilt codes from an elderly African-American quilter in the Charleston Marketplace. Ozella McDaniel Williams sold Tobin a quilt and told her that quilts were used to communicate on the Underground Railroad, but would tell her no more.

Tobin says Williams told her, "You'll get it when you're ready."

Williams said some of the quilt patterns, such as wagon wheels, flying geese and log cabins, were actually directions and mnemonic devices that helped slaves memorize their plans for escape.

Much of the book looks at connections between African and American quilting patterns. The authors admit there is huge disagreement among quilters about the origins of many patterns.

Historians say there is no evidence of secret codes: It is one woman's story, and Williams is now dead. But Tobin notes that slaves from Africa brought their own cultural heritage, and they used techniques of secrecy and encoded objects as a form of resistance and escape in the Americas.

Miller has incorporated the disputed quilting claims into his model for the memorial. No one had trouble with the design, but historians railed at interpretative panels that would link the quilt codes with the Underground Railroad and with Frederick Douglass.

"The Underground Railroad is one of the deepest American historical myths," says David Blight, a professor of American history at Yale. "It is a story of escape; it is a story from slavery to freedom. The problem has been: How do we carve through the enormous folklore and mythology of this story to get to the real stories of real fugitive slaves?"

Blight, who has written books on the Underground Railroad and Frederick Douglass, believes that children can appreciate this story through a mythic window. But he says that there is no mention of quilt codes in the oral histories of former slaves recorded during the Great Depression.

As for Douglass, he was literate, forged his own escape papers, dressed in sailor's clothing and escaped by land and by sea.

"Douglass was, politically, one of America's most ferocious political critics of the middle-19th century," Blight says. "To represent him through this apocryphal tale of quilt codes is a disservice."

When the controversy hit the pages of The New York Times, Miller found himself wondering about all the statues surrounding Central Park.

The Christopher Columbus memorial was built at a time when the country didn't honor the fact that America had long been occupied before Columbus reached its shores.

A mile to the north, in front of the American Museum of Natural History, Teddy Roosevelt rides high astride a horse, flanked — at a lower level — by a black man and a Native American.

"This is pretty much a racist kind of image," Miller says, "kind of 'great white father.' And this kind of manifest destiny position that still prevails!"

Miller argues that most of the statues in the park come more out of myth than documented fact.

Kate Levin, New York City's commissioner of cultural affairs, says some of the wording on the interpretive panels will change, so that nothing will be claimed about quilt codes or their relationship to Frederick Douglass.

In the end, she says, art is not the same thing as history. Rather, art works with imagery and metaphor.

"Public art is a process that engages many voices," says Levin. "We are always called upon to strike a balance between realizing an individual artist's vision, and responding to the needs of the community and the public at large."

She says the quilt patterns will work well amidst New York's streetscape and with the statue of Douglass.

"It will be a wonderful public space, and very affecting," she says. 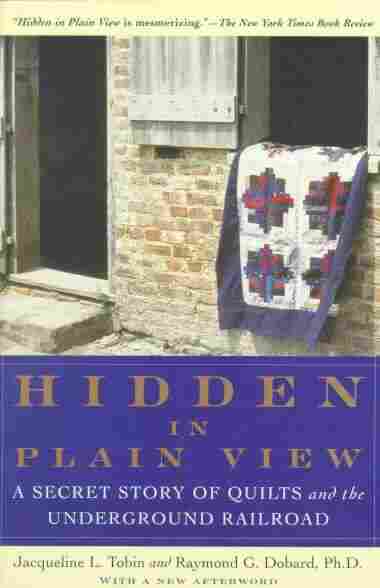 A Secret Story of Quilts and the Underground Railroad