Accessibility links
Artists Retreat into Solitude at MacDowell Colony The MacDowell Colony, 100 years old this month, is a haven where artists of all types — writers, composers, sculptors — can sweep away distractions and just create. Though solitude is the retreat's main draw, interdisciplinary feedback is central to its appeal. 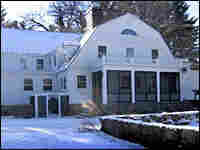 A look at some of the artists who have stayed at the MacDowell Colony, and what they were working on at the time: 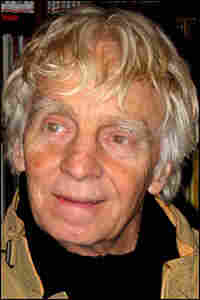 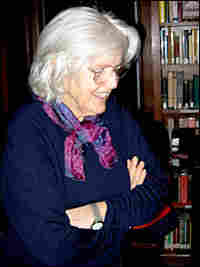 Dorinda Clifton, 77, is writing a memoir during her stay. Art Silverman hide caption

One of America's best-known artist colonies, the MacDowell Colony, turns 100 this month. The retreat is a haven where artists of all types can sweep away distractions and just create.

MacDowell's operations are subsidized by grants from foundations, corporations and individuals. Writers, composers, photographers, filmmakers and sculptors — both famous and unknown — vie for the 32 free studios at the retreat. Once accepted, an artist can stay for as little as a couple of weeks, or as long as a couple of months.

When they arrive, artists find a kind of isolation hard to find in our wired world. There's no phone. No fax. No friends. No family. It's just a cabin in the snowy woods.

Writer Emily Raboteau lives in New York City. She came to MacDowell to work on a novel. She received a desk, chairs, pencil and paper — and ice grippers. The trek from one isolated, one-room studio to another is icy, so colony residents strap the ice grippers to the bottom of their shoes. There are 450 acres to traverse at MacDowell.

Another colony resident, Belfast composer Elaine Agnew, plays a piece called "To a Wild Rose," written by Edward MacDowell. She says it's so famous that every pianist in the world has played the tune. A hundred years ago, MacDowell owned the land where the colony now sits. He savored its isolation and his ability to get work done there. After his death, his wife, Marion, encouraged other artists to come.

And for the last century, artists have accepted the invitation, coming to step outside of their daily lives for a short time. Privacy is respected, but collaboration and discussion is common.

Screenwriter Kit Carson — who wrote Texas Chainsaw Massacre 2 and the film adaptation of Sam Shepherd's play Paris, Texas — has visited MacDowell twice. He says that the interdisciplinary discussion there is valuable.

"You sit around at dinner, talking about this, talking, and then somebody runs off and brings you back some stuff and shows it to you," he says. "That, I didn't realize, was part of the magic here, because people are really open to showing their ass here."

But the most important conversations at MacDowell occur between the artists and what's inside their heads. The gift of solitude means driving themselves to do their best.

Kit Carson explains how he works.

"What it feels like when you write is that you're standing on the ledge of a cliff, your feet hanging over the edge, and there is an axe between your legs," he says. He says his responsibility is to feel that way, but not choke.

Other artists at MacDowell hover at the edge of playfulness — serious playfulness. Quietly spy on what's going on in the various studios, and you might find John Grade, a sculptor playing with ice. Grade has created a layer cake of ice. Sheets of it are stacked in frames.

Grade explains: "What I'm trying to do here with this hairdryer is warp each piece slightly. It's not doing exactly what I had thought... If you come down below it, you can see all of this almost wart-like growth on the bottom."

Sherri Wood plays with sound in her studio. She's making a wall of overlapping, repeating lines in different voices: A man cries, "Help me, somebody!" Another man says in a monotone, "There's no such thing as vacation." Still another man advises, "Every light-saber battle must advance the story." A woman exclaims, "Yes, she can!"

These are recorded voices of people reciting mantras. Not the religious kind, but phrases they use to keep their spirits up every day. When Wood gets back to her home in North Carolina, she has a plan to blast the mantras out of a loudspeaker from the roof of a travel trailer she owns.

"The reason I write is I have all these ghosts in my past, and I want to have them tell the story," she says. "Then I don't have to live with this story any more."

All this work and play is productive — but not always appreciated by others.

Composer John Alyward says in his experience, the creative process is always seen as a luxury.

"The big thing I got when growing up was, 'Oh, you're a pianist? I always wanted to play the piano. I never had the time,'" he says.

Alyward said that he always wanted to reply, "Well, neither did I."