Accessibility links
Obsession Drives Fincher's Look at 'Zodiac' Killer Obsession is the theme of this movie, about a real-life serial killer in San Francisco during the 1960s and '70s. It's a driving force for the killer, the guys trying to catch him, and for filmmaker David Fincher, who is nothing if not a stickler for detail. 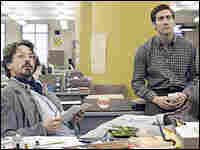 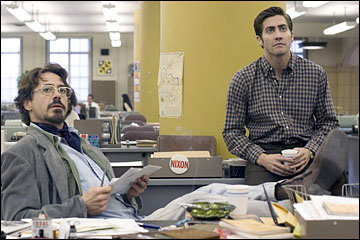 Learn about amateur sleuths who are still tracking the Zodiac killer.

Partly because of the stylized visuals he brought with him from the world of music videos, and partly because of the violent subject matter in the films Seven, Fight Club and Panic Room, David Fincher is widely considered one of Hollywood's most inventive suspense-film directors. The filmmaker's fan base now amounts to a cult following, with some viewers seeing his movies dozens of times.

And in Zodiac, which is based on a real-life, San Francisco horror story, Fincher seems intent on providing his fans with new reasons for multiple viewings.

A murder on a lovers' lane gets Zodiac off to a pulse-pounding start. Fincher's camera then takes us on a tour — not of the crime scene, nor of the police investigation — but of the offices of the San Francisco Chronicle, on Aug. 1, 1969.

It's not an aimless tour. The camera is charting the arrival that day of a letter that bears a symbol where the return address should be.

The letter claims credit for the murder we've just seen, as well as another one, offering details and demanding front-page play for a weird cipher — a coded message — to prevent further deaths.

The Chronicle's crime reporter, Paul Avery, makes a phone call to the police and confirms that the details are right. And a two-decade mystery begins.

The killer would soon be known as the Zodiac, and though all the newspapers give him coverage, he kills again and again, each time sending more ciphers.

The symbols intrigue the Chronicle's cartoonist, Robert Graysmith, who hovers around the reporter's desk deciphering and offering explanations he has gleaned at the library.

Watching him, you'll detect something a little obsessive about his interest in the story, which means you're getting the film's drift. The real Robert Graysmith got so caught up in the Zodiac murders that he quit cartooning to write the two books on which this movie is based.

Graysmith's onscreen alter ego, played by Jake Gyllenhaal, seems so tightly wound that the filmmakers thought it worth noting at the end that the real Graysmith now has a healthy relationship with his children — a character reference you won't find in most films.

Obsession is the movie's theme: a driving force for the killer, the guys trying to catch him, and of course, for the filmmaker, who is nothing if not a stickler for detail.

In his earlier pictures, Fincher amped up the emotions as he went for your jugular. Here, he's all about what the police think they know, and why they think they know it: evidence, procedure, reconstruction at the crime scenes.

Fincher is so good at keeping info-crammed dialogue crackling, that a whole raft of really smart actors have signed on to work with him: Mark Ruffalo and Anthony Edwards as homicide detectives; Robert Downey Jr., making the crime reporter's boozy paranoia look alarmingly lived-in; Brian Cox hamming it up as showboat lawyer Melvin Belli.

All of them are sharp and period-perfect in a film that doesn't just get the '70s cars and sideburns right, but that actually brings back the style of '70s detective flicks.

There are no tidy, last-minute plot twists to make you feel good in Fincher's Zodiac, just focus — to keep an audience focused — and the most disciplined filmmaking you've seen in forever. 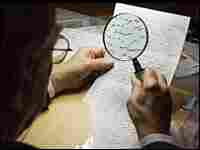 The film Zodiac, about the Bay Area murders, is being released Friday. Paramount Pictures hide caption

Leslie Harper on Her Amateur-Sleuth Parents

The premiere Friday of David Fincher's film Zodiac is renewing interest in a series of Bay Area murders in the late 1960s. But for some people, the mystery of the Zodiac killer has been a years-long obsession — one that will persist until the case is solved.

The Zodiac killer terrorized the San Francisco area, with his murders occurring in the evening at parking lots or other quiet areas. He taunted police and local media with letters and cryptograms, boasting of his crimes. At one point, he threatened to kill children on school buses.

The Zodiac has claimed responsibility for 37 murders, though the actual confirmed number of victims is five. Four of the victims were couples parked in a car together, shot and stabbed to death. The other victim was a cab driver.

The killer has never been identified, but theories about possible suspects abound: a Manson family member, "Unabomber" Ted Kaczynski, a San Francisco businessman dubbed Mr. X and a man named Arthur Leigh Allen, who died in 1992.

A community of amateur sleuths remains fascinated with the case, poring over details and visiting crime scenes. One follower of the murders, Tom Voigt, says his Web site has led to contacts with people involved in the case. Now, even police acknowledge that Voigt's site — which has 5,000 pages and about 10,000 individual images — is the main clearinghouse for Zodiac material.

Voigt earns a living by doing computer work, but most of his free time is spent on Zodiac-related pursuits. He says he has spent $75,000 investigating the case over the last 10 years.

John Mikulenka has made a documentary about amateur Zodiac detectives, Hunting the Zodiac. It will debut Saturday at the 2007 Zodiackiller.com Task-Force Meeting in San Francisco.