Accessibility links
Canadians Transfixed by Pig-Farm Murder Trial The trial of a Canadian accused of murdering dozens of women and mutilating their bodies on his farm near Vancouver has begun. Robert "Willie" Pickton, the notorious "Pig Farmer" of British Columbia, was arrested five years ago, after human remains were found on his farm. 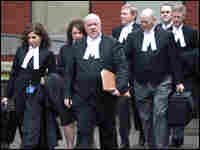 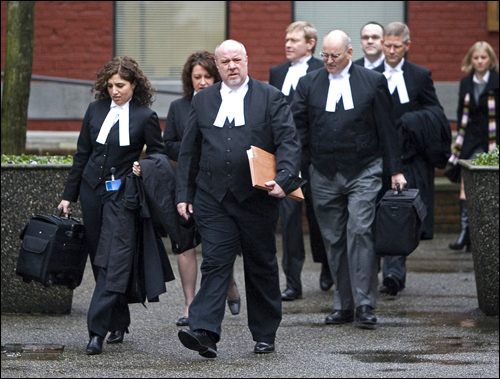 The trial of a Canadian accused of murdering dozens of women and mutilating their bodies on his farm near Vancouver has begun. Robert "Willie" Pickton, the notorious "Pig Farmer" of British Columbia, was arrested five years ago, after human remains were found on his farm.

Pickton is now charged with killing 26 women. But investigators think he may have killed twice that number; many more disappeared from Vancouver's Skid Row in the period in question.

The trial is more than a month old, yet it's only barely begun. The judge says it may last a whole year. Investigators have cataloged 600,000 exhibits, most of that from the archaeological dig the police set up on Pickton's farm. Tens of millions of dollars have gone toward DNA testing alone. And this trial addresses only six of the 26 murder charges against him; more trials are possible.

Inside the high-security courtroom, prosecutors are methodically laying out their case, dwelling on gruesome minutiae such as the pattern of the saw marks on human skulls found at the farm.

Pickton sits impassively behind bullet-proof glass. His back is to the gallery, so victims' family members end up staring at his long, stringy hair, which he wears slicked back to his collar.

In the first week, the gallery was packed, but now it's half empty. Wayne Leng, who was friends with Sarah DeVries, one of Pickton's alleged victims, says he isn't surprised.

"I don't constantly think about this anymore," Leng says, "because I'd go crazy if I did."

Leng is not alone. In the late 1990s and early 2000s, friends and family were searching Vancouver for dozens of missing women.

The common thread in all the cases was one neighborhood — Vancouver's Downtown East Side.

Ann Livingston knows the neighborhood well — she runs a non-profit here called Vancouver Area Network of Drug Users. Standing in the doorway of her organization, she says the heroin and crack trades dominate this stretch of East Hastings Street.

Recently, a woman stopped by asking for free "rigs" — slang for syringes.

Livingston's organization hands out clean syringes to help addicts avoid getting HIV from dirty needles. The woman, Rosie Rucka, takes a whole box. She fits the profile of the 60-odd women who have disappeared from this area in recent years: She's an addict, and she has sold sex to pay for drugs. But she won't pick up "dates" anymore, she says — not since Pickton's arrest.

"I think about it all the time," Rucka says. "I'm scared to be out there. I'll do anything but be out there and do that for money."

Asked if that change is due to Pickton, Rucka says yes. "It's scary, man. He frigging fed those girls to the pigs, man!"

After Rucka leaves, Livingston says she doubts women here are any safer now than they were before the Pickton arrest; especially those walking the streets at night.

"There are hundreds of women out tonight selling sex that have nowhere to take a pee; nowhere to get warm," Livingston says. "We don't have so much as a drop-in center. And yet Canada spends $70 million on DNA evidence. I think that's insane."

Family members of the missing women have also expressed frustration at the scale and cost of the Pickton trial.

Lynn Frey is the step-mother of Marnie Frey, one of Pickton's alleged victims.

"He's not only torturing us with what he's done," Frey says, "but he's also torturing society."

Frey acknowledges that Pickton has pleaded not guilty, and that he has a right to a defense. And ultimately, she says, the trial will be worth it — if it reminds Canadians that the disappeared women were human beings, who were loved.