Accessibility links
A Potential for Brutality Growing up in China near the end of the Cultural Revolution, Yinong Young-Xu witnessed cruelty and violence. Now in the U.S., he believes he must avoid exercising the brutality he learned as a child.

Listen
A Potential for Brutality 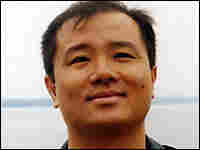 Yinong Young-Xu emigrated from Shanghai to the U.S. when he was 16. He has a doctorate in epidemiology from Harvard, and now researches post traumatic stress disorder in veterans. Yinong visits China to help vaccinate children against rotavirus. Courtesy of Yinong Young-Xu hide caption

I believe in our innate potential for brutality.

When I was 6, in the streets of Shanghai, near the end of the Chinese Cultural Revolution, I watched a parade of trucks carrying political dissidents on their way to be publicly executed. At the front of each truck was a young man, roped from head to toe, wearing a sign that said "Counter-revolutionary." If not for that, you would have had trouble guessing what the event was. There was an air of festivity; thousands of bystanders were laughing, talking, gesturing and pointing at the prisoners. The whole population of Shanghai must have been there. It was like a traditional Chinese New Year's celebration — except the city was celebrating its own brutality.

I believe that we are brutal because innocence can be corrupted, like mine was as a 6-year-old in a time of revolution. When I entered first grade, I started to wave flags, denounce the politically fallen of the day and shout, "Death to counter-revolutionaries!" My friends and I did not want to miss any of the meetings where political dissidents were publicly tortured and humiliated. That was entertainment for us, just the way movies are for American kids.

Science has taught us that normal genes in cells can be damaged or mutated to become deadly "oncogenes" that result in cancer. I believe brutality is a disease just like cancer; each and every one of us is at risk, including me. I used to fantasize about revenge against the Japanese for the atrocities they committed against the Chinese in World War II. Once I reduced an utterly innocent Japanese girl to tears. I said many cruel things and couldn't stop the venom from pouring out even though I had already begun to feel sorry for her. When our better instincts are suppressed, isn't that the beginning of brutality?

I am fortunate. I was too young to be a Red Guard where my brutality would have been codified. And I had a grandmother who showed me the value of kindness. My own capacity for brutality has never been fully tested. But I believe it is always there.

We're taught not to smoke in order to prevent carcinogens from damaging the genes in our cells. I wish we could learn to prevent hatred from forming and brutality from actualizing. I teach my children that hitting is not allowed, period. I encourage them to be compassionate, to aid those in need and to stand up for the weak. Most of all, I try to be vigilant over the purity of my motives and cautious about my actions. I believe I must guard against my own potential for brutality and the mutation of my own humanity.