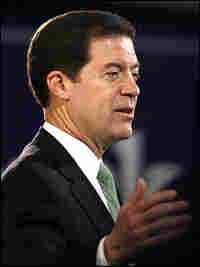 Presidential candidate Sen. Sam Brownback embraces conservative social issues — he is strongly anti-abortion. But the Kansas Republican also talks about subjects dear to liberals, like stopping the killing of refugees in Darfur.

In an interview with Renee Montagne, Brownback explains why he thinks his "bleeding-heart conservative" views will resonate with voters in 2008.

You are strongly conservative — a strong, social conservative on what could easily be called the hot-button issues — abortion, stem cell research, gay marriage, fiscally conservative. Are those two sets of positions enough to get the base of the Republican Party on board your candidacy?

Well, I think they help a lot, but I don't think they're enough to overall win. I'm also a bleeding-heart conservative. I do a number of things working on human rights issues, prison recidivism rates, and then I also push and have worked a lot on the social issues of rebuilding the family.

And rebuilding the family for you — and I think this is where people have heard of you nationally so far — has to do with your very, very staunch opposition to abortion and to stem cell research.

Well, I think we should defend life. And plus, you just look at human history — any time we've ever treated one class of humans as subject to another class or as property, as in the case of when you research on the youngest of humans, we've always regretted it. And I believe we're in a very similar situation today where you treat the youngest of humans as property rather than as a person.

And stem cell research, which does involve the destruction of embryos, you're not at all persuaded by an argument of greater good that could come out of that?

You know, you could destroy me today and harvest my body parts and save a number of lives — you know — with my heart, kidneys, liver. Is that a greater good? Now, some might suggest it is, but it just is morally wrong to take one human life for the benefit of another.

Well, considering that these are the sorts of issues that have been coming up and that have — on the other side — a fair number of champions who will argue for stem cell research and many people who believe it's important for women to be able to control whether or not they have an abortion. When you add this all up, what do you think it says about American culture today in this year, in this time?

Well, I think what it says is that we've got a big discussion. I just think you've got a society that's really looking at these issues, trying to determine which way it's going to go. It's also why I bring in the being pro-life but being fully life — working on issues like human rights and children in Darfur — because I think we have to stand for life in the womb, but we also have to stand for the young woman that's in poverty or the guy that's trapped in his own bondage by what he has done in prison. And I'm not for cutting that prison sentence short, but I am for work that we can reduce that prison recidivism. And I think that full definition of life is a much more appealing and broad-based definition that draws a lot more people into it.

Now, you converted to Catholicism several years ago. And there is something in the Catholic Church known as the seamless garment, moral consistency. Specifically, how would you describe the common thread of your positions?

Well, the common thread of my position is that I believe all human life is sacred, is beautiful, is the child of a living and loving God, period. It's at all stages; it's at all places. It doesn't matter what that life looks like. It doesn't matter the nature of that life. It is human and it is therefore sacred and it should be protected and we should fight for it.

This has put you here and there in partnership politically with Barack Obama — you have together called for intervention in Darfur, against the genocide in Darfur — with Edward Kennedy on the question of North Korea. How do you work with these folks when you're actually trying to work together when your politics are pretty far apart in other respects?

My experience has been that if I will simply look at the issue, we can work together on a lot of topics. You know, most things people can actually agree on up here. It's the heat-seeking ones that divide us and divide us aggressively. But I find that there are a lot of topics. One of the best legislative accomplishments I've had here on an international basis and on saving lives is the bill we did against human trafficking. And I did that with [the late Sen.] Paul Wellstone... who — he and his wife — worked aggressively on this. We had a consortium that included Chuck Colson and Gloria Steinem behind this legislation. And it has helped and it has saved lives, and it stopped particularly young women from being trafficked into sexual servitude. That's the sort of things that we can get done when we look past judging each other and look to the issue of what we can accomplish.

Now, let me ask you a question about compromise. One sort of example, the late governor of California, Pat Brown, who was against the death penalty as a Catholic, but he was also a Democrat and a liberal — but he was against the death penalty personally and morally, and yet he signed off on executions because it was the law. He separated out even his moral position from what he had to do as the representative of those who had voted for him. Taken to other issues such as abortion or stem cell research, if stem cell research was the law and you were president, what would you do?