Accessibility links
Soccer Field a Rare Respite from Baghdad Violence The "People of Baghdad" soccer field isn't much to look at: mostly dirt, 18 feet too short, with torn yellow and green goal nets at each end. But over the last two years, hundreds of Iraqi teens and men from all religions and sects have come here to play soccer. It's a rare respite from the sectarian and religious strife tearing Baghdad apart. 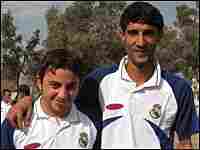 A Shiite and Christian player of the Karada Biscuits pose before the game. Soraya Sarhaddi Nelson, NPR hide caption 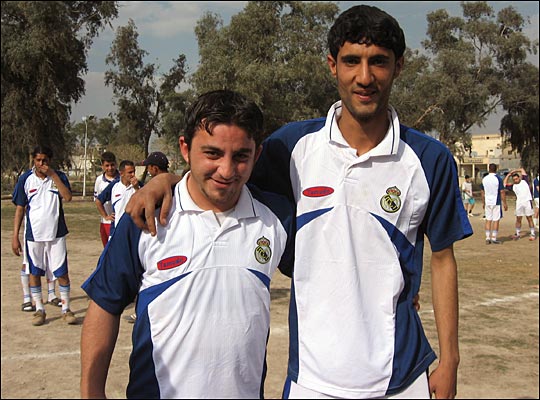 A Shiite and Christian player of the Karada Biscuits pose before the game. 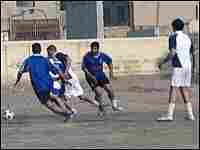 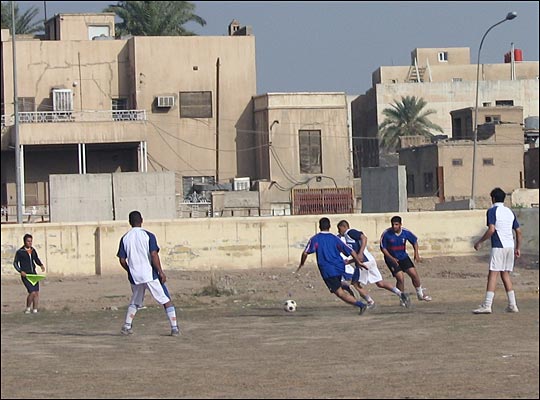 The Sadr City Arabism and Karada Biscuits play soccer on the Karada field.

Relentless violence in Baghdad has left the city largely divided along sectarian lines. But a small field in the Baghdad neighborhood of Karada provides a rare break from the violence.

For young Iraqis looking to escape bloodshed in this city, a dusty plot encased in razor wire hardly seems the place to go. The International Green Zone, a prime target for insurgents, sits a half-mile to the west. The Sheraton Hotel, which is also subject to attacks, is even closer.

But the Iraqis running on this makeshift soccer field and sweating in mismatched polyester jerseys say they couldn't be happier.

"What we are trying to do is strengthen peace to defy violence and defy the terrorists and others who don't want good for our country," says Abbas Abdulkarim, 25.

Abdulkarim and the 15 other young men playing here on a recent afternoon in the Shiite neighborhood of Karada are part of a two-year-old soccer league that defies the stereotype of a divided Baghdad. Sunnis and Shiites may be killing each other and Iraqi Christians to gain control over Iraq.

But here, the only gain anyone is interested in is scoring goals.

Abdulkarim says his team — The Biscuits — have Shiite, Sunni and Christian players. Their goalie adds to the rainbow coalition: He's Egyptian.

Veterinarian Ahmad Muwafak, 29, is one of the Sunni players. He bristles when asked about what it's like to play alongside Shiites teammates like Abdulkarim.

"I don't ask whether my teammates are Sunni and Shiites," Muwafak says. "Religion is something between you and God."

Opposing team member Hussein Abbas agrees there is no place for partisanship on the pitch. He is from the Shiite slum known as Sadr City, which is home to black-clad death squads.

"God willing, there is no difference between us. We feel like we are all one," Abbas says.

Such comments are music to the ears of league founder Abu Salam, a Shiite government worker who doubles as a referee during these afternoon games.

"I don't teach them only sports," Salam says. "I teach them to leave politics outside. They are here for sports only."

It's not always easy to get the players to separate the two. Recently, the Sadr City team, called "Arabism," brought a 12-foot banner of radical Shiite cleric Moqtada al Sadr to display on the sidelines. Abu Salam and other organizers insisted they put it away.

There are other drawbacks. The soccer field is 18 feet shorter than regulation, leaving only eight players on each team instead of the usual 11.

Sometimes the smaller teams come up short because players die. The Karada Biscuits' fullback, Nouri, was killed by a roadside bomb in front of his house last fall.

But even death doesn't stop the games. Sadr City's Abbas says his mother urges him not to go. He says she worries about the dangers, including four military checkpoints he must pass to get here.

That soccer players are targeted by insurgents adds to the worries. Two professional players were shot dead Friday in Ramadi.

But the Karada league players say it's worth the risk. Besides their love of soccer, they hope to serve as an example of unity for other Iraqis.