Accessibility links
In China, Wealthy Turn to Female Bodyguards Some wealthy Chinese are seeking a measure of protection by hiring private bodyguards. Businessmen have begun hiring female bodyguards for occasions where it can be awkward to have a man in the job. 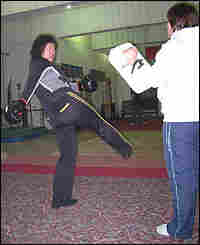 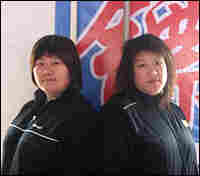 Some wealthy Chinese are seeking a measure of protection by hiring private bodyguards. There are some occasions, though, where it can be awkward to have a burly guy with a buzz cut and shades by your side. So some businessmen have begun hiring female bodyguards.

Zhao Xin, 23, grew up in a family of athletes in Changchun city in North East China, a region traditionally known as Manchuria. She's heavy-set, 5 feet 10 inches tall, and her right roundhouse kick slams into the heavy punching bag with a meaty thud.

"Before I got into sports, I was rather introverted," she says. "I didn't dare to talk much. But once I started practicing martial arts, my character started to change. I became more outgoing… just like a boy."

At sports school, Zhao trained in full-contact sparring. She recently joined a training program for bodyguards at the Tianyu martial arts school. The course includes instruction in driving, computer skills and self-defense-related laws. Zhao says she has already found work.

A local executive, who had received threats that his child would be kidnapped, hired Zhao to escort his child to and from school.

Zhao's classmate Jiang Meng, 22, says she can't wait to graduate from the bodyguard course and go on her first assignment.

"In traditional China, education didn't do women much good," Meng says. "They'd just find a husband, get married and lead a stable life. That's not what I hope for. I like danger. After all, we only live once. I want to show everybody what I've got."

One company in southwestern Yunnan province recently hired one of Xing's bodyguards, a woman named Sun Linlin. The company's president spoke on the condition that he be identified only by his family name, Zhao. He notes that Chinese have long prized Manchurian bodyguards for their physical size, loyalty and bravery, and female bodyguards have advantages of their own.

"I think that women tend to work more carefully and their powers of observation are sharper than men," the company president says. "My company also has three or four male bodyguards, and I find it works best when we use men and women in different combinations, depending on the task."

He confirms that his female bodyguard handily fended off four assailants who harassed his wife in a local restaurant in January.

China's government has not recognized the bodyguard profession's legal status, so for the moment, Xing calls his bodyguard firm a "business etiquette" company. Some law-enforcement officials believe the protection business should not be left to the private sector. But Xing says that firms like his need recognition and regulation.

"Every dynasty in China has had private security firms," Xing says. "They fill a definite need within our society. After all, the government can't send troops and police to give private entrepreneurs personal protection."