Accessibility links
Artist Takes Inspiration from Amputation Lisa Bufano lost her legs and her fingers from a staph infection when she was 21. The award-winning artist recently premiered a modern dance piece, Five Open Mouths, about coming to terms with her body as it is. 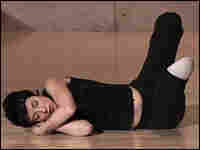 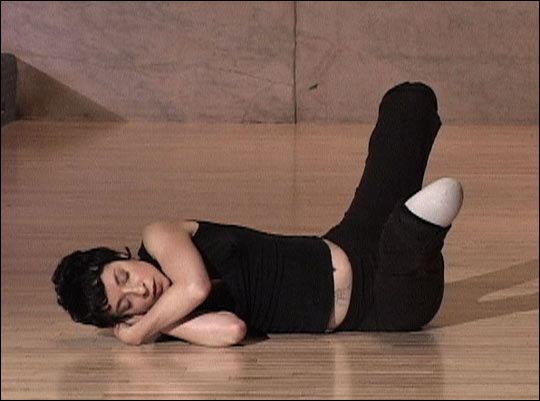 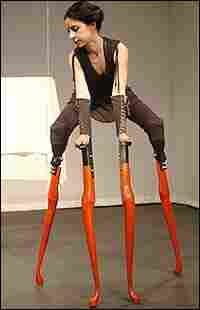 This 2005 piece, Fancy, was commissioned by the University of Linz. In it, Bufano wears stilts fashioned from red, Queen Anne-style table legs. Gehard Aba hide caption

Lisa Bufano is an award-winning artist who recently performed her first major dance work to a packed house in New York. She is also a double amputee.

Bufano's legs and fingers were amputated when she was 21 after a staph bacteria infection raged through her body, shutting off blood flow to her limbs.

But the loss of her legs has not kept this Boston-based artist from moving.

At 34, she runs several miles a day on high-tech carbon fiber prosthetic legs that look like big, C-shaped springs.

Bufano's movement pieces — she turns them into video podcasts and posts them on her Web site — use music, props, prosthetics and illusion to explore the idea of deformity.

"I want to be seen as attractive and beautiful and sexy like everyone else," says Bufano. "But I think that in my artwork, for me, it's trying to find some comfort with being everything a human can be."

If her stage characters evoke a circus side-show, that's fine, says Bufano. She also connects with comic-book characters who have undergone extreme transformations.

A few months ago, she received a grant to stage a modern dance work in New York City.

The piece, choreographed by Heidi Latsky, is called Five Open Mouths. The title alludes to the five wounds where Bufano's fingers used to be; the dance tells the story of Bufano coming to terms with her body as it is.