Accessibility links
Low-Carb vs. Low-Fat: A New Study Weighs In Recently, low-carb, high-fat dieting strategies have challenged traditional low-fat, high-carb wisdom. A new study seeks to get to the bottom of the low-carb vs. low-fat debate. Researchers pitted four popular diets against each other and compared the results.

Listen
Low-Carb vs. Low-Fat: A New Study Weighs In 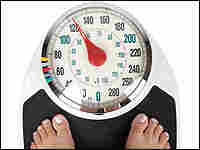 To get to the bottom of the low-carb vs. low-fat debate, researchers from Stanford University tested four diets, each with varying levels of fat and carbohydrate intake.

The research finds that women assigned to the Atkins diet – the diet with the lowest carbohydrate intake – lost slightly more weight than women on other diets.

Yet questions remain about the long-term efficacy of low-carb, high-protein, high-fat diets. The findings appear in The Journal of the American Medical Association.

-- The Atkins diet, which is high in protein and low in carbs.

-- The Zone diet, which is low-carb but not as low as Atkins.

-- The LEARN diet — which stands for "lifestyle, exercise, attitudes, relationships and nutrition." It's low in fat, high in carbohydrates, and most commonly recommended by health professionals.

-- The Ornish diet, which is high in carbohydrates, but very low in fat.

In the study, 311 women who were 15 to 100 pounds overweight were assigned to one of the four diets. After one year, Gardner assessed the women's health and weight.

On Atkins, the average weight loss after a year was 10 pounds. On LEARN, Zone and the Ornish diets, women lost three to six pounds. With all diets, the participants' health improved: All of the women who lost weight also lowered their cholesterol, triglycerides and blood sugar.

Why did Atkins dieters do better? For one, more of the participants stuck to the diet. Gardner says that could be because the Atkins diet is so simple: Participants drastically reduce carbohydrates and completely eliminate any high-fructose corn syrup, white bread or white rice.

It could also be that the Atkins diet keeps you full longer, says Walter Willett, a medical nutritionist at Harvard's School of Public Health.

"When people eat a large amount of carbohydrates," Willett says, "those kinds of foods leave you hungry. And within a few hours of eating, we're usually looking for something to eat again."

Food with protein and fat keeps dieters satisfied for a longer period of time. Dieters in the Atkins group ate higher levels of fat — even saturated fat — than dieters in the three other groups.

Gardner says on a short-term basis, high levels of animal fat aren't a problem: After one year, the Atkins dieters didn't end up with higher levels of cholesterol. In fact, cholesterol levels went down if they lost weight.

It appears that for study participants, the benefits of losing weight outweighed the harm of eating saturated fat. But the question remains whether the Atkins diet is healthy over the long term.

Gardner has concerns about the effects of Atkins over five to 10 years.

"Is a long-term, low-carb diet high in saturated fat good for you?" he asks. "Probably not. But we really only have one year [of] data and probably have to look longer."

Nutritionist Walter Willett says other research has found that diets rich in vegetable fats actually decrease heart disease and diabetes. In the end, says Willett, even Dr. Robert Atkins acknowledged that not all fats are equal – he came to view healthy vegetable fats as better than animal fats.

Gardner and his colleagues also found that routine counseling with a dietician is what many overweight individuals need to help them stick to an effective weight-loss regimen.