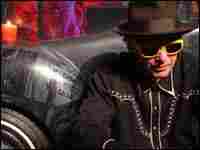 Ry Cooder has spent his decades-spanning musical career experimenting with rootsy American music — from Dust Bowl folk to blues, gospel and world music. His guitar prowess has led him to multiple sessions as a studio player for The Rolling Stones, musical scores for a number of films, and several Grammys, including one for his work with Buena Vista Social Club. Cooder has released more than 20 albums, counting his film scores, dating back to the early '70s.

Cooder's latest album, My Name Is Buddy, tells the story of a cat named Buddy who was found living out of a suitcase in an alley behind a record store in Vancouver. A backstory for the resourceful cat grew from the melodies bouncing around Cooder's head, and soon an entire album of rootsy Americana had developed. The album's allegorical overtones allow Cooder to explore working-class life and the importance of regional music in America's identity.