Accessibility links
The Arcade Fire: Growing Up, Getting Better In the momentous Neon Bible, The Arcade Fire's members are worn down by modern living, and their hearts are in tatters, but their fever burns more brightly than ever. On the heels of Funeral, the follow-up takes a far less obvious approach.

The Arcade Fire: Growing Up, Getting Better

The Arcade Fire: Growing Up, Getting Better

My Body is a Cage 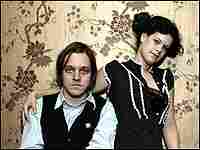 When the Montreal rock group The Arcade Fire released its first album, 2004's near-universally loved Funeral, the band became an overnight indie-rock titan. Funeral was built as a series of whimsical, fragmented anthems in which fledgling teens find themselves abandoned, their parents missing in the night. A response to the deaths of several family members, as well as a rollicking wake held in their memory, Funeral found the ramshackle septet in mourning, but celebrating lost loved ones with a celebration full of pent-up feelings, expressed with an infectious fervor.

In the momentous Neon Bible, The Arcade Fire's members have grown up: Their bodies are older now, worn down by modern living, and their hearts are in tatters, but their fever burns more brightly than ever. Whereas Funeral's accessibility came mainly from the group's youthful energy, the follow-up takes a far less obvious approach. The orchestral swells are still there, complete with strings and horns, and The Arcade Fire's signature sound hasn't changed much. It's raw, intense, melodic pop, filled with fever-pitch emotional climaxes and wordless choruses composed of many ghostly voices. But the band has also moved on from escapism to coping with the uncertainty of adult life, with increased attention to musical subtlety and storytelling.

The breathtaking "My Body Is a Cage" finds singer Win Butler in a contemplative state of mind. Over a pulse-like drumbeat, he sings, "My body is a cage / that keeps me from dancing / with the one I love / but my mind holds the key." Slowly, his weary voice is surrounded by the sounds of a colossal pipe organ that filters in like a mysterious mist. The result is one part soulful ballad and one part philosophical dilemma: If he and only he is responsible for his freedom, then why the hesitation? Why not go barreling straight into freedom? "My Body Is a Cage" serves as a bombastic linchpin for Neon Bible, bringing an undercurrent of fear and anxiety to the surface. Butler sings, backed by a powerful choir of commiserating voices — a chorus of unhelpful angels. As the song builds to a momentous conclusion, Butler repeats, "Set my spirit free / Set my body free." It's either a desperate plea to a higher power or a triumphant declaration, or maybe a little bit of both.

It makes sense that such a fervent rock band would make a jaw-droppingly beautiful album about pop culture, consumerism, cultural arrogance and other maladies typical of post-industrial society. After all, Butler and company have spent the majority of their careers bucking conventional wisdom while embracing spontaneity and experimentation. The band takes an idiosyncratic approach to music-making: It purchased an abandoned church as studio space, it's traveled to Budapest to record with large-scale choirs and orchestras, and it often incorporates a jumble of reflective tape, neon signs, megaphones and motorcycle helmets in its live concerts.

The result is a uniquely grandiose, profoundly affecting brand of art-rock that sounds entirely contemporary, but also hearkens back to the golden eras of Dylan, Springsteen, David Byrne and Kate Bush, among others. Neon Bible's subjects live in the morning after, when the teenagers from Funeral must survive in a world of their own creation. It's a world much like our own — full of greed, uncertainty, tension, dishonesty, hubris and quiet moments of doubt — but The Arcade Fire still restlessly seeks deliverance.