Accessibility links
Biologist Keeps Track of Iran's Rare Cheetahs It's not easy to track down one of the fastest and rarest great cats in the world. But one biologist is working to attach radio collars to cheetahs living in remote areas of Iran. With fewer than 100 of the animals left, they are among the most imperiled great cats on Earth. 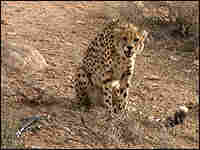 A male cheetah held securely but gently in a "soft-catch" foot-hold snare. The technique is one of the safest ways to capture cheetahs and allows scientists to sedate the animals for radio-collaring. WCS/DoE-CACP/ZSL/UNDP hide caption 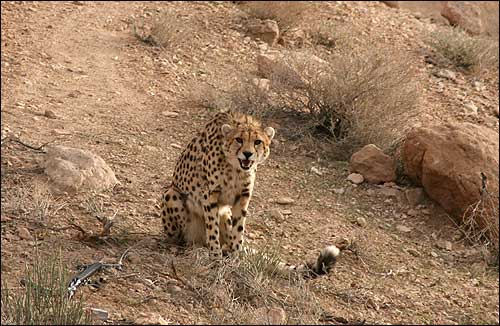 A male cheetah held securely but gently in a "soft-catch" foot-hold snare. The technique is one of the safest ways to capture cheetahs and allows scientists to sedate the animals for radio-collaring. 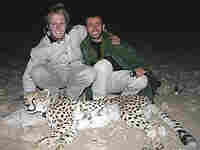 Guy Balme (left) of the Wildlife Conservation Society and Kamran Kashiri of the Conservation of Asiatic Cheetah Project celebrate the first successful radio-collaring of an Asiatic cheetah in Iran. WCS/DoE-CACP/ZSL/UNDP hide caption 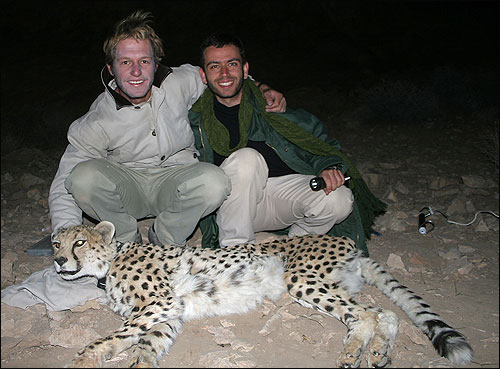 Guy Balme (left) of the Wildlife Conservation Society and Kamran Kashiri of the Conservation of Asiatic Cheetah Project celebrate the first successful radio-collaring of an Asiatic cheetah in Iran. 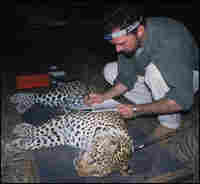 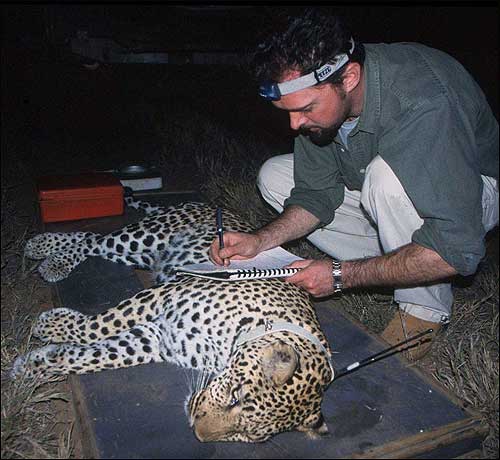 It's not easy to track down one of the fastest and rarest great cats in the world. But biologist Luke Hunter of the Wildlife Conservation Society is working to do just that. His team has, for the first time, successfully attached radio collars to Asiatic cheetahs.

Asiatic cheetahs live only in remote areas of Iran. With just 60 to 100 left, they are among the most imperiled cats on Earth.

Hunter, the director of the WCS Great Cats Program, spoke with Alex Chadwick in this National Geographic Radio Expeditions interview:

Alex Chadwick: I didn't even know that there were Asiatic cheetahs, I thought these animals were in Africa.

Luke Hunter: Most people do think of the cheetah as pretty exclusively African, but the species used to occur all through the Arabian peninsula and much of Central Asia, as far east as India. In Asia, the cheetah only occurs in Iran, where there is a tiny population left. We estimate perhaps 60 to 100 animals.

So they are very rare, and we know that the cheetah is the fastest creature on Earth. How do you go about catching such a thing?

It's quite a challenge because it's the most extraordinary habitat. It's nothing like you'd envision if you saw them on Animal Planet where they're on the lovely, open green grasslands of the Serengeti.

Iran is very arid, very rocky – basically open rock desert, with these incredible sheer mountains popping up out of the middle of the desert. The valleys through these mountains are the areas these cheetahs seem to prefer. We targeted those areas for this capture effort.

The cheetahs are incredibly shy; they're nothing like the cheetahs you see on any television program. They are just incredibly unapproachable. You have to catch them with traps; we use a very safe and very ingenious method many decades old developed by North American trappers.

It's a spring-loaded, soft-catch foot snare. It's all buried in the ground, and the cheetah doesn't know where it is. The art is placing it in an area where you think the cheetah will walk. The spring triggers, and the snare grabs the animal by the leg. It's extremely safe. There is no injury to the animal. It holds the animal securely but quite gently, and that enables us to approach the animal to sedate them for fitting the radio collars.

What has happened to the cheetahs in Iran? Why are the numbers so low?

We don't know because they have never been intensively monitored. But I think there are two important elements. One was that they probably never reached the high densities that cheetahs on the open savannahs in very fertile parts of Africa can reach, so they are naturally quite rare.

The other key issue, which really hastened their decline, was the Iranian Revolution in 1978, 1979, which removed all the protections for the areas in which the cheetahs lived. That meant a proliferation of uncontrolled hunting in those areas — both on cheetahs, but perhaps more importantly, on their prey species. So the really critical thing facing the cheetahs in Iran today is that there has been massive over-hunting of their prey species.

What is your plan now that the collars are on these animals?

The plan with these collars is that it will give us very fine-scale data, which enables us to answer questions like: Which are the most important areas in the environment to cheetahs? What areas do we need to make sure we are conserving and setting aside for posterity so we can make sure that cheetah populations can flourish?

I gather there is a changed attitude on the part of the government in Iran; conservation of wildlife matters more now perhaps than it did when the revolution took place. Still, you represent an American institution — the Wildlife Conservation Society. How is it for you dealing with the Iranian government?

You're absolutely right about the Iranians being serious about conservation now. They truly value the cheetah. I think they're proud of the fact that Iran is the only country which has managed to hang on to the Asiatic cheetah. They are determined to make sure that remains the case.

It is, of course, difficult with the current political climate in some ways. For example, during my last trip, the Iranian government was not permitting American nationals into the country to work with me. It's just fortuitous that I happen to be Australian, so I was let in.

But on the ground, the cooperation with the government is terrific, and I think they are terrifically excited about this new project. It's not only the first time that radio collars have been put on Asiatic cheetahs, but the first time pretty much since the revolution that these kinds of intensive research projects have happened in Iran, which is a real change for the better.