Accessibility links
Congress Takes Up Complaints on Credit Cards Executives from major U.S. banks were on the hot seat in Congress Wednesday over credit-card fees and penalties. One bank executive apologized to an aggrieved customer at the hearing. He said that in his case, the bank had simply blown it. The statements came as lawmakers in Washington heard complaints from consumers about credit-card industry practices. 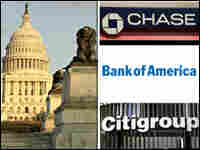 The credit card industry is facing a much higher level of scrutiny in the new Congress. Chip Somodevilla/AFPGetty Images hide caption

Executives from major U.S. banks were on the hot seat in Congress Wednesday over credit-card fees and penalties. One bank executive apologized to an aggrieved customer at the hearing. He said that in his case, the bank had simply blown it.

The executives, from Chase, Citigroup and Bank of America, were called to testify before the Senate permanent subcommittee on investigations about their fee and penalty policies. In the session, they were hit by an onslaught of criticism from both Republicans and Democrats.

Also testifying at the hearing was credit-card customer Wesley Wannemacher, who said he learned the hard way how a relatively small balance on his credit card could get out of control.

In 2001, Wannemacher ran up $3,200 on his credit card to pay for his wedding, including a photographer and flowers. He says he agreed to come to Washington to testify so others wouldn't have to go through what he did.

Chase, the company that issued Wannemacher his card, recently agreed to waive the rest of his debt. And the CEO of Chase Card Services, Richard Srednicki, acknowledged things should never have gone as far as they did.

"I want to begin my remarks with a public apology to Mr. Wannemaker," Srednicki said. "We have polices and procedures in place at Chase to identify customers like him who have fallen into deep financial trouble and are having a difficult time working their way out. In this case, we simply blew it."

"I think a large majority of our customers do understand that, sir," Srednicki answered.

What emerged from the hearing was the fact that the new Congress is focusing more intently on bank lending practices.

As a result of recent hearings, several banks, including Chase and Citigroup, are announcing changes. Chase says it will no longer charge additional over-limit fees after a customer exceeds his or her credit limit for more than 90 days.

And last week, Citigroup said it will end two controversial practices: One penalizes a card holder for being late on another credit card; the other allows the bank to raise rates at any time.