Accessibility links
Detecting High-Risk HPV in Older Women Gynecologists are recommending that women over 30 undergo a test to detect high-risk strains of HPV — the virus that can lead to cervical cancer. The HPV vaccine is only recommended for women 26 and younger. 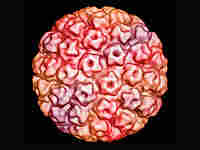 The human papillomavirus, or HPV, can lead to the development of cervical cancer. A new HPV vaccine is recommended for women age 26 and younger. Older women are advised to undergo a separate test that can detect high-risk strains of the virus. Corbis hide caption

When it comes to preventing cervical cancer, your age determines which test you get — or whether you get a vaccine. Scroll down to find out what experts are recommending and why.

Women all know about the Pap test. It's the screening device that looks for precancerous lesions on the cervix. Jodi McKinney, 41, of Bethlehem Township, N.J., has had a Pap smear every year for two decades.

"Everything always came back negative, so you know everything was fine," McKinney says.

Or so she thought. But about a year ago, her gynecologist suggested adding another test that the American Cancer Society and the American College of Obstetricians and Gynecologists (ACOG) recommend.

The HPV test can detect an active infection with one of the high-risk strains of the virus. McKinney says she had heard about the HPV vaccine, but she had never heard about the test for the virus until a nurse handed her an informational brochure.

"I had no idea what it was until I saw the pamphlet and read about it," she says. "Then I consented right away to have it done — luckily."

Even though her Pap tests had come back normal, McKinney's HPV test was positive. That meant she was infected with at least one strain of the virus that sometimes leads to cancer.

"They're a test that relies on a human being to read a slide" and interpret what they see, Bowers says. "They're not as reliable as we'd like them to be."

Over time, Pap smears eventually pick up most slow-growing cancers. But the benefit of the new HPV test is that it tells you right away if you're infected with a virus that could cause the cancer.

In McKinney's case, when a follow-up biopsy revealed she had precancerous lesions, she opted for surgery to remove them.

"I was very fortunate," she says.

The HPV test was first introduced in 1999. But only now is it starting to be used as a primary screening tool. Kaiser Permanente, a large HMO based in California, has found that giving both the Pap and the HPV test to women 30 and older helps detect more cases of precancerous disease.

Dr, Ruth Shaber of Kaiser Permanente is a big fan of using the two tests in combination.

"We have found women who otherwise would have gone through the system with normal Pap smears, not ever suspecting that there's something wrong," says Shaber.

Not Recommended for Women Under 30

The American Cancer Society recommends waiting until women are 30 or older before adding the HPV test to the Pap smear. That is because nearly half of all women in their 20s have transient HPV infections that their immune systems can fight off.

"Most of the women who come into contact with HPV, in fact 80 percent, will spontaneously clear the infection over two years," says Dr. Tom Wright of Columbia University.

"So the women we're worried about are the ones who have persistent infections," Wright says. These are the women who need to be watched closely.

Annual Pap Smears May Not Be Necessary

Women who are negative on both the Pap test and HPV test are at such low risk for cervical disease, says Wright, that "we can safely tell them that they don't need to be re-screened for another three years."

This means scores of women are now being told to give up the annual Pap smear. Instead, the three-year interval is recommended. Many patients are reluctant to follow this advice at first.

"That's taking some education," says Dr. Mamie Bowers. "Women say, 'What? I don't have to do this every year?'"

Gynecologists do check for other potential problems.

"The full annual exam involves a full pelvis exam and a breast exam," says Bowers. So gynecologists still want their patients to come in for a visit every year.

But now, the American Cancer Society is recommending that women over 30 have a genetic test that looks for the virus that causes cervical cancer, the human papillomavirus (HPV). Here, a look at why the recommendation has changed and the issue of HPV vaccination in older women:

Since cervical cancer is now relatively rare in the U.S., why do women need a second test?

Pap smears have played a big role in preventing cervical cancer. About 4,000 women still die from the disease every year, but that is a 70 percent decline in deaths from the mid-20th century. Yet the Pap smear still has its flaws, says Beth Huff, a nurse practitioner at Vanderbilt Medical Center who specializes in cervical issues.

For instance, trying to find precancerous cells with a Pap smear is like searching for a needle in a haystack, she says. "You're looking at 300,000 cells on a slide, and there may only be a handful, five or 10, that are abnormal." The HPV genetic test is considered a far more sensitive test.

How do the tests differ?

A Pap smear test misses precancerous cells in 25 percent to 50 percent of cases. But combined with the HPV test, a diagnosis is missed in a much smaller number of cases, according to Columbia University pathologist Thomas C. Wright.

Should women ask their doctors for the HPV test?

Women over 30 should ask their doctors for the test, in addition to the Pap smear, says Beth Huff. The risk of new infection is much lower after the age 30 — it drops to 7 percent-10 percent. But if a woman is over 30 and infected, there's a chance she's had the disease for a long time — what's called a persistent infection — and that puts her at a high risk for cervical cancer.

Huff says the American Cancer Society doesn't recommend that younger women ask for the test. For women under 30, the prevalence of HPV is high, but there's also a good chance that their immune systems will take care of the disease. "We would like to save them the anxiety and the cost of testing of a minor infection that will clear up," Huff says.

The American Cancer Society now recommends that if you're over 30, and your Pap smear and HPV test come back negative, you can wait three years, vs. the standard one year, before you have another Pap smear. Why?

If both tests are negative, a woman's risk of developing a significant abnormality within the next three years is extremely low. "Say you go out the night after your Pap smear, and you meet Mr. DNA HPV type 16 — which is one of the high-risk strains," says Huff. "That infection is not going to turn into cancer within a three-year period." If the following Pap smear or HPV test is positive, doctors say that is still an early enough detection to successfully treat the abnormality.

The Centers for Disease Control and Prevention recommends that women under 26 be vaccinated for HPV. Should women over 26 get the vaccine?

"I think there are lots of women over the age of 26 who could benefit from vaccination," says pathologist Thomas Wright, who has consulted with pharmaceutical companies on the vaccine. And some physicians and nurse practitioners are giving the HPV vaccine to women over 26, says Huff. But there are no studies to show what kind of protection the vaccine has in older women. Those studies are underway, says Wright. GlaxoSmithKline is currently testing a cervical cancer vaccine on women up to age 55. The company says it plans to begin filing for FDA approval of the vaccine next month.

If a woman tests positive for HPV, should she still get vaccinated?

Does insurance cover the HPV test and vaccine?

Most insurance covers the HPV test. But insurance won't cover the vaccine in women over 26, because the FDA has not approved the vaccine for use in older women.