Accessibility links
House Democrats Call for 2008 Pullout from Iraq After a contentious intra-party debate, Democrats in the House of Representatives outline a plan requiring U.S. troops to be withdrawn from Iraq by August of 2008. The provision is attached to a bill providing more funding for the troops in Iraq and Afghanistan. 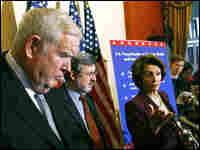 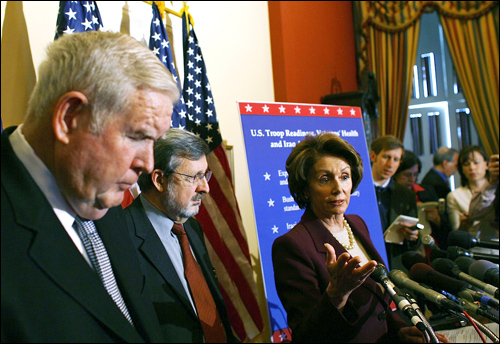 After a contentious intra-party debate, Democrats in the House of Representatives outline a plan requiring U.S. troops to be withdrawn from Iraq by August 2008. The provision is attached to a bill providing funding for the troops in Iraq and Afghanistan.

In the Senate, Democrats have outlined a measure calling for the troops to be sent home starting next spring. It is the first time Democrats have set a firm withdrawal date — and it puts them on a collision course with President Bush.

The most controversial aspect of the plan withdraws U.S. troops from Iraq next year.

"It calls for the strategic redeployment of U.S. combat troops by the end or sometime in 2008," House Speaker Nancy Pelosi said. "Only then can we refocus our military efforts on Afghanistan to the extent that we must."

Under the plan, the Iraqi government must meet benchmarks, including providing for security and allocating oil revenues.

The legislation also provides an additional billion dollars for the war in Afghanistan, which Democrats say has been neglected by the White House. And it adds $3.5 billion for veterans' health care, in the wake of the revelations of substandard conditions at the Walter Reed Army Medical Center in Washington.

"That's why today I'm introducing a joint resolution calling for the president to change course and bring stability to Iraq by beginning a phased redeployment of U.S. forces from Iraq no later than 120 days from enactment of the resolution," Reid said, "with the goal of redeploying combat forces from Iraq by the end of March of next year."

Reid says the Senate will begin debate on the measure next week.

It is not clear whether the resolution will have the 60 votes necessary to pass; nor is it certain House Democrats will be able to win approval their plan.

In each chamber, most Republicans are likely to oppose the measures; the White House quickly issued a veto threat over the House funding bill.

But even if they lose the vote, Democrats seem to believe they will win by forcing Republicans to vote to support an unpopular war — a move that Democrats hope will enhance their chances in next year's congressional and presidential elections.