Accessibility links
The Guts to Keep Going Amy Lyles Wilson helped her newly widowed mother adjust to life alone, teaching her how to do things her father had always done. It inspired Wilson's belief in "gutsy, wrinkled broads" who have the courage to carry on.

Listen
The Guts to Keep Going 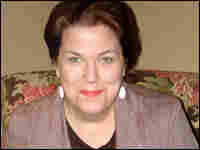 Amy Lyles Wilson is a writer and editor in Nashville, Tenn. She was a writing fellow at the Earlham School of Religion in Richmond, Ind., in 2003. Wilson is studying theology at Vanderbilt University Divinity School, and working on a book about grief. Courtesy of Amy Lyles Wilson hide caption

I believe in old women who learn new tricks — gutsy, wrinkled broads who eat alone in restaurants and pump their own gas.

When my father died six years ago, my mother, then 79, had already done quite a lot. She had moved from her hometown in Mississippi to work in the big city even though many of her generation stayed put. She had raised three daughters, chaired PTAs, volunteered for a host of causes and nursed her husband through heart surgery. Along the way, she lost a breast and part of her colon to cancer.

What she had not done before Daddy's death, however, was pump her own gas. After the funeral, when she stopped the car at the filling station, neither of us moved. We were both waiting, I guess, for Daddy to wink at us before sliding out to "fill 'er up."

As I collected myself and turned to open the door, my mother said, "I guess you better show me how this works."

After we finished, she asked, "That's it?" "Yes ma'am," I said, "You'll do fine." I tried not to think of all the things my mother would now have to do by herself.

As we drove off, Mother told me about her old friend Betty Ann whose husband Carl had died recently. It seems Betty Ann got in the passenger seat of their new Buick and waited a full three minutes for Carl to appear behind the wheel before finally hauling herself to the other side of the car and driving downtown. Telling me this story, my mother was crying just a bit. She said, "I guess you do what you have to do."

I did not marry until age 41, so I know about pumping gas and eating alone in restaurants. But I haven't a clue what it's like to lose your soul mate unexpectedly after 52 years of marriage, leaving you to deal not only with grief but also with car mechanics. Mother has always been a quick study, though, so it was not long before she could tell her widowed friends which Exxon had the lowest prices, which BP still offered full service, which Chevron was well lighted at dusk.

There have been other challenges for my mother, of course, since my father died. From downsizing the family home to allowing a widower preacher to "go Dutch" with her at the Olive Garden on occasion, my mother has put one foot in front of the other with grace and fortitude.

It is a small thing, perhaps, to believe in elderly women doing nothing more than putting gas into cars and getting themselves from point A to point B without an escort. But to my mind — and heart — it's a belief in something much bigger than that: the guts to keep going.