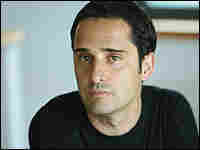 Live From Studio 4A

Jorge Drexler found himself in the spotlight in 2005, when he became the first person to win an Academy Award for an original song written in Spanish.

Drexler won the Oscar for "Al Otro Lado Del Río" featured in The Motorcycle Diaries, a film about the young, pre-revolutionary Che Guevara.

But instead of taking advantage of his newfound fame in the United States, he turned inward.

The songs on the CD were inspired by the rhythm of a lighthouse in his native Uruguay. Drexler currently lives in Spain.

Drexler visits NPR's Studio 4A, where he plays a few tunes and tells Debbie Elliott that for him, playing music for an audience is a way of looking inward and outward at the same time.