Accessibility links
First Hearings Set for 14 Key Terrorism Suspects The Pentagon holds its first hearings Friday for 14 high-profile terrorism suspects detained at Guantanamo Bay, Cuba. The hearings, closed to the media, are to determine if the prisoners are so-called "enemy combatants." 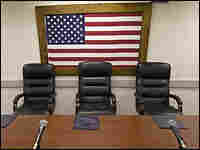 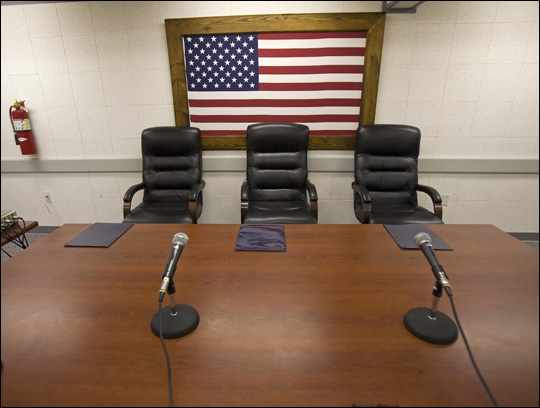 A detainee hearing room inside the U.S. Naval base at Guantanamo Bay, Cuba.

The Combatant Status Review Tribunals (CSRT) will determine whether the U.S. military considers the prisoners "enemy combatants." Unlike previous CSRT proceedings for other Guantanamo detainees, these hearings will be conducted in secrecy.

Pentagon officials say that the hearings are being held in secret for national security reasons. But government officials refused to answer when recently asked by reporters if the hearings were closed to public scrutiny in an effort to hide evidence of torture at CIA prisons.

President Bush has acknowledged publicly that "tough" interrogation techniques were used against the 14 men know being held at Guantanamo Bay.

The U.S. government considers the 14 men to be of particular interest, saying that each of them is dangerous and in possession of information on terror networks and planning.

Among the prisoners: Khalid Sheikh Mohammed and Ramzi Binalshibh. The government says both men were deeply involved in the Sept. 11, 2001, attacks on the World Trade Center and Pentagon. Also included in the group are men believed to have been involved in the deadly August 1998 attacks on the U.S. embassies in Kenya and Tanzania, and the October 2000 bombing of the USS Cole in Yemen.

Each prisoner will face three military officers at his hearing. Unclassified evidence against them will be read at the proceeding. Classified information will be withheld from the prisoners. Each man is assigned a personal representative, but will not have a lawyer.

An edited transcript of each proceeding will be released to the public at a later date.