Accessibility links
Film Contrast: Loud '300,' Quiet 'Silence' Two debuts: 300 is a fierce, stylized retelling of Spartans at the Battle of Thermopylae. Into Great Silence is a documentary about a French monastery where a vow of silence is observed.

Two debuts: 300 is a fierce, stylized retelling of Spartans at the Battle of Thermopylae. Into Great Silence is a documentary about a French monastery where a vow of silence is observed. 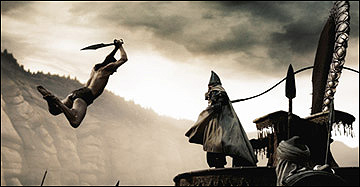 A Spartan warrior (Michael Fassbender) leaps over Persian guards in a scene from 300.

Once you choose an evening anchor, if you do, you can choose a movie this weekend. And your choices include "300" and "Into Great Silence." MORNING EDITION and Los Angeles Times film critic Kenneth Turan sees a huge difference between them.

KENNETH TURAN: One is incredibly loud, the other almost completely silent. One offers non-stop bloody action, the other examines a life of meditation and devotion that has existed for more than 900 years. Two more different films than "300" and "Into Great Silence" would be hard to imagine. And the fact that they are in theaters at the same time only heightens the contrast.

TURAN: The loud, violent film is "300," an action epic that recreated the celebrated battle of 480 B.C. between a group of plucky Spartans and an enormous horde of invading Persians. Graphic novelist Frank Miller and director Zack Snyder are the people behind this stylish piece of comic book mythologizing.

"300" is one of those films you don't want to think too hard about. It is, at least in the short run, something to see. But unless you love violence as much as a Spartan, Quentin Tarantino, or a video game-playing teenage boy, you will not be endlessly fascinated. The problem is that the visual panache that made Snyder an acclaimed director of commercials works better for 30-second spots than two-hour features. Those not washed in the blood, so to speak, will soon reach their limit in terms of how many soldiers they want to see speared and hacked to death.

(Soundbite of film, "Into Great Silence")

TURAN: "Into Great Silence," by contrast, casts a major league spell by going deeply into a monastic world that lives largely without words. In the hands of filmmaker Philip Groening, it becomes clear that silence is not the absence of sound. It's a physical place, a destination with value and meaning in a chaotic world, somewhere arrived at with difficulty and left with regret.

The director, after being turned down for 15 years, was finally allowed to spend six months at the Grande Chartreuse Monastery in the French Alps. The resulting film lasts two and three-quarter hours, but that length is essential. "Into Great Silence" completely immerses the viewer in the monastic experience. It's a world where all sounds, whether the ringing of bells or the hypnotic Gregorian chanting, become pregnant with meaning. "Into Great Silence" is a film where nothing seems to happen, but everything comes to pass. We've been allowed a glimpse of eternity, and who would not be changed by that?