Accessibility links
Invention May Help Troops Make a Rapid Ascent A prize-winning device developed by an engineering student at MIT may soon help troops in Iraq and Afghanistan pull themselves quickly out of dangerous situations. "It's almost like falling upward," inventor Nathan Ball says of his gizmo. 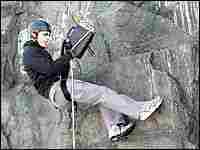 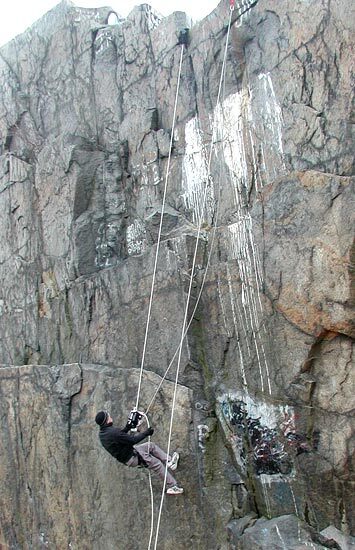 See the Rope Ascender in Action

About the Rope Ascender

The 15-pound device, the size of a hand-held power tool, can lift a 250-pound load more than 600 feet into the air at nearly 10 feet per second on a single battery charge. Its maximum capacity is about 300 pounds.

In much the way that an anchor is raised and lowered on a ship, the device relies on the capstan effect, which produces a tighter grip each consecutive time a rope is wrapped around a cylinder. The grip continues to tighten as more weight is applied to the line. A standard-sized rope is weaved between a series of specially configured rollers that sit on top of a turning spindle. As the battery-powered spindle rotates, it continuously pulls rope through the device.

A new device developed by an engineering student at the Massachusetts Institute of Technology may soon help troops in Iraq and Afghanistan pull themselves quickly out of dangerous situations. Nathan Ball's Atlas Powered Rope Ascender helped the graduate student pick up a $30,000 prize for innovation from the Lemelson-MIT Program.

The military asked for the device on an annual wish list it gives to MIT. It's part of a new effort to get some of the brightest young engineers in the country working to help soldiers and Marines survive on the battlefield.

Ball recently demonstrated a prototype at a rock quarry south of Boston, where the device allowed him to scale a 50-foot cliff in a few seconds. He describes the device as "kind of like a super high high-power tool" that operates in a manner similar to a cordless drill. But instead of turning a drill bit, the rotary head on the ascender spins to pull a rope.

The device is designed to help soldiers and Marines who have to drop into caves or wells in Iraq and Afghanistan. Currently, Ball says that's done by hand. If insurgents are down there, the soldier has to yell and hope that the other troops in his unit can pull him up fast enough.

Ball designed his device so that a soldier who found himself in such a situation could fly up and out much faster — at 10 feet per second.

This invention is one of more than a dozen being worked on by MIT students through the school's Institute for Soldier Nanotechnologies.

At a campus lab, researchers are working on new kinds of super-small, super-strong fibers for high-tech body armor and other applications. Much of the research is longer-term. So recently, says spokesman Franklin Hadley, the institute has been working with the military to come up with ideas for inventions that aren't necessarily so nanotech but that could be built more quickly.

Students have built a prototype water purifier that runs off the heat from an exhaust pipe. Others are working on a glove that can translate hand signals into voice commands to be transmitted to other soldiers.

And there's the Atlas Powered Rope Ascender. Army Maj. Rex Blair is getting a master's in physics at Harvard and doing research at the MIT lab. He served a tour of duty in Baghdad.

Blair says the powerful little winch could be used to drag obstacles out of the road or to rip a door off its hinges. And he says that when a variable-speed control is added, the device might be good for hoisting wounded soldiers.

The Army has placed a $120,000 order for a first batch of the Ascender power winches. Ball says he'll use his $30,000 prize to launch a company around his new invention with some fellow students when he graduates this spring.