Accessibility links
Bush Visits Colombia in Latin American Tour President Bush arrives in Colombia on Sunday for meetings with President Alvaro Uribe. The United States supports Uribe in his battle with guerrillas who profit from the cocaine trade. Colombia is the third stop in Bush's five-nation Latin American tour. 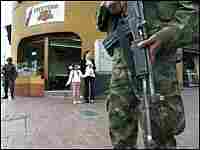 Colombian President Alvaro Uribe has been called Bush's closest regional ally. Since coming into office in 2002, he has depended heavily on the support of the United States.

About $700 million of annual U.S. aid goes toward military action to erode coca crops. The aid also has gone toward social programs and military action against Marxist guerrillas, which has helped to stabilize the country and boost Uribe's popularity.

Uribe's administration has been pushing for a free-trade pact with the United States. Both countries have signed the pact, but it's awaiting congressional approval, which Bush has warned will be a difficult task.