The White House is handing over internal documents showing it considered firing all 93 attorneys two years ago. Eventually eight attorneys were dismissed. Dahlia Lithwick, legal analyst for Day to Day and the online magazine Slate, talks with Madeleine Brand. 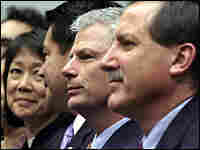 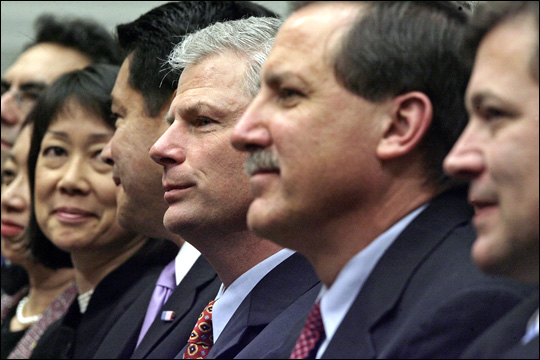 New details contained in documents released by the Department of Justice show that the White House had been discussing the firings of eight U.S. attorneys far earlier — and in more detail — than had been originally revealed.

The Justice Department has maintained that it fired the prosecutors because of their job performance. Officials also told lawmakers under oath that the decision was made solely by the Justice Department. Since then, however, a much more complicated picture has emerged.

The prosecutors, most of whom were fired in December, allege that their dismissals were politically motivated, something that the White House and Attorney General Gonzales have denied. In a news conference today, Attorney General Alberto Gonzales admitted mistakes in how the matter was handled, but he also said the dismissals were appropriate because all U.S. attorneys serve at the pleasure of the president and can be asked to leave at any time.

The White House says that Miers' suggestion in early 2005 came at the start of the president's new term, when there was discussion about how to freshen things for the next four years.

At the time, presidential political adviser Karl Rove weighed in on the suggestion and said it was not a good idea.

Kyle Sampson, the chief of staff to Attorney General Alberto Gonzales, also recommended against a wholesale dismissal of federal prosecutors. Instead, he spent the next year drawing up a list of potential dismissals, ranking individual prosecutors on several considerations, including how they pursued administration policies, and how loyal they were.

Sampson increasingly became the focus of the congressional investigation into whether the firings were politically motivated. He resigned Monday.

In a brief statement released Tuesday, Attorney General Gonzales said, "I am very appreciative for his service, counsel and friendship during the last six years and I thank him for his service to the Department."

But Sampson's resignation clouds the picture for the Justice Department.

It's now known that Sampson exchanged e-mails with Harriet Miers regarding the firings, and about New Mexico Republican Sen. Pete Domenici's interest in getting U.S. Attorney David Iglesias fired for not being aggressive enough in pursuing Democrats in a voter fraud case.

These latest developments have fueled calls by Democrats for Gonzales to step down.

New York Sen. Charles Schumer says there's been a breach of trust and a misuse of power by the Justice Department.

He says that Sampson's resignation increases the heat on Attorney General Gonzales.

"Kyle Sampson will not become the next Scooter Libby, the next fall guy," Schumer says, referring to the recent conviction of former White House aide I. Lewis "Scooter" Libby. He also added that Karl Rove and Harriet Miers should come before Congress to explain their actions.

Press Secretary Tony Snow, traveling with President Bush in Mexico this week, confirmed that the president had a conversation with Attorney General Gonzales in October about complaints regarding some U.S. Attorneys. Snow says the president mentioned it to Gonzales "in passing," but he was adamant that Mr. Bush did not complain about specific prosecutors.

Snow added that when the White House hears complaints about the performance of its appointees, it has "an obligation to pass that on."

He emphasized that the president never saw Harriet Miers recommendations about firing all of the U.S attorneys.