Accessibility links
Scientists Hunt for Solution to CO2 Problem Scientists seek a way to rid power-plant smokestacks of carbon dioxide — the greenhouse gas warming the planet — before it hits the atmosphere. Some plans involve store gas thousands of miles underwater, in the middle of the ocean. 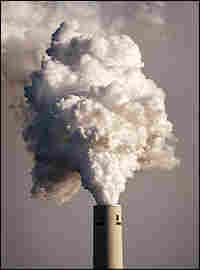 Each year, the world releases more than 25 billion tons of carbon dioxide. Scientists are working to find ways to trap and store CO2 before it goes into the atmosphere. The process is called carbon sequestration. iStockPhoto.com hide caption

Scientists are trying to figure out how to get carbon dioxide — the greenhouse gas that's warming the planet — out of the smokestacks of coal-burning power plants before it gets into the atmosphere.

At the Massachusetts Institute of Technology's laboratory for energy and the environment, scientists have just finished a careful study of ways to trap and store carbon dioxide. It's called carbon sequestration.

MIT scientist Howard Herzog has been working on the carbon dioxide problem for years. He says that the world puts out more than 25 billion tons of carbon dioxide a year. On average, that's four tons for every man, woman and child on the planet. But Americans produce a lot more than the average, and that bothered Herzog.

"When people look back," he says, "the Iraq war is going to be a distant memory... They are going to be on the front lines fighting climate change and they're going to look back and say, 'What were those people thinking? How could those people leave the world in this shape?'"

Some people are skeptical that sequestration will work. But the MIT team says there are several plausible technologies.

Some involve stripping the CO2 out of the combustion gases in a conventional coal power plant. Others wouldn't burn coal at all, but turn it into a gas, making it easier to strip off the CO2.

The problem is: Where do you put the CO2 once it has been stripped away? Daniel Schrag, geoscientist at Harvard University's Laboratory for Geochemical Oceanography, thinks it could go under the seabed.

"When you inject it under the ocean floor into the sediment," he says, "the carbon dioxide will want to sink, not rise, so it will stay there forever, geologically speaking, or millions of years at least."

Under thousands of feet of water and then hundreds of feet of sediment, the CO2 would be cold, compressed and heavier than water. Theoretically, it wouldn't rise.

Ocean burial wouldn't work everywhere. In Kansas, for example, it would cost too much to pipe the CO2 to the ocean. But Schrag says our industrial society could potentially bury all of its CO2 under the seafloor.

For the plan to be taken seriously, scientists will have to prove it won't leak back out. According to Schrag, no one can do that with 100 percent certainty. But he says it's better than our current practices, which directly release CO2 into the atmosphere.

"Slow leaks [are] a whole lot better than what we are doing today," Schrag says, "which is complete leakage."

Engineers there have been stripping CO2 from oil and gas pumped by an offshore platform in the Nordic Sea, and pumping it back down.

"Then again," he says, "you have the environmental consequences of emitting carbon dioxide and that's pointing in the direction of doing something."

Another incentive for Statoil's carbon sequestration is a big tax that Norway levies on offshore oil and gas operations for emitting CO2.

In the U.S., power companies are worried about the potential cost of sequestration.

Sean Plasynski is the sequestration technology manager at the U.S. Department of Energy. Right now, he says, taking carbon dioxide out of coal could raise electricity costs by 50 percent or more.

"The big issue is driving down the cost," Plasynski says. "We have several technologies that we are looking at and the ultimate goal is driving those costs down to around 10 percent of an increase in the cost of electricity."

Howard Herzog and his MIT colleagues say it is too soon for anyone, especially the government, to pick winning technologies. Rather, they say, the Department of Energy needs to spend more time and money trying to figure out what might work. Only then should industries take over carbon sequestration.

Scientists agree that alternative sources of energy are inevitable, but coal is not going to disappear soon. If they can figure out how to do it, sequestering coal's unwanted CO2 underground could be a solution.

Massachussetts Institute of Technology Study: "The Future of Coal"